as mentioned before, I was instructed by the Boss to bring home a football box for us/her to bust. I chose UD Icons because it was the cheapest box in the store besides base Topps and Upper Deck.

With football Icons, you get the absolute Greatest Quarterback who ever played the game don't even argue with me or say any other name on the box and the wrappers. 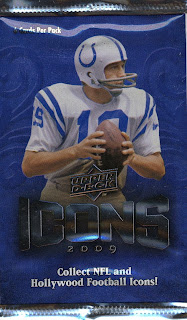 with baseball, you get ..... jeter. Football? The absolute God-like greatest to ever pick up a ball! Baseball?... jeter... Another reason football is better. 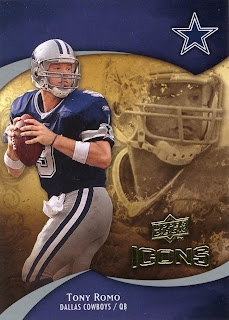 They look okay, my wife really liked them. I think that's because of the colour coding in team colours. I got Tony Romo, but no Witten, Eli but no Peyton, and AP but no Lord Favre. 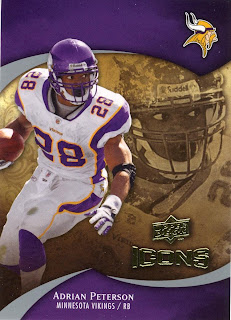 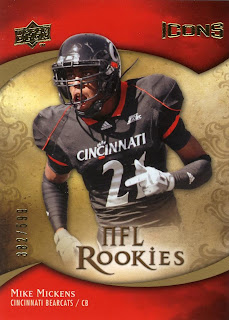 The rookies are pictured in their college uni's with no mention of their NFL team affiliation, despite this set being released over 2 months after the draft. All RC's are #/599

The inserts - other than the Rookies and the auto, we got 5 numbered inserts. 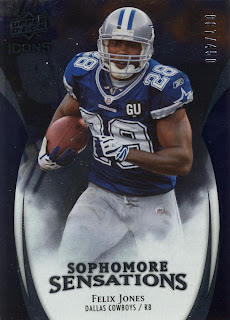 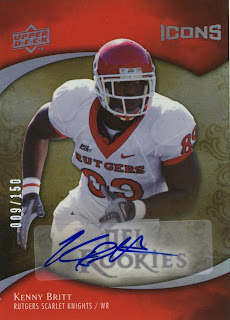 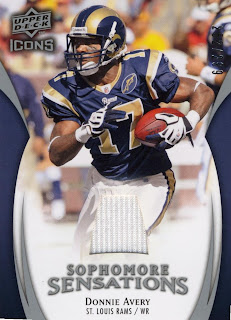 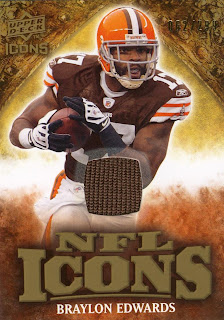 Icons also has 2 Lettermen per box.

First up, Jerry Kramer /76 - And I swear, the letter is actually a beautiful Packer Green, but my scanner refuses to show you. Something about light refraction properties through fabric. Hey, I dunno, ask my wife. It's what she told me. 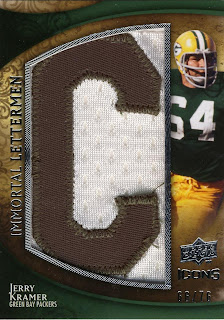 and of course, we didn't get our second Lettermen promised us. Instead my wife rips into the pack, looks up at me and asks, who's Gale Sayers? 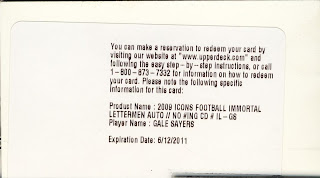 My wife was pretty pumped at getting such a special card that you had to request it instead of UD just putting it in the packs.... (I didn't explain it to her, she was having such fun...) so I showed her where to go online to redeem it.

Like someone I know says... pics, or it didn't happen. When it gets here, I'll post it for all to see.

btw, after we/she broke this, I went online to take a look at the checklist. And I swear, if I had pulled an Anthony Michael Hall or a Corey Haim Lettermen instead of what we did.... someone would pay, and pay dearly. Jus' sayin'
Posted by Captain Canuck at 8:01 PM

What do the lettermans spell out in Icons?

Team names I'm assuming... my Jerry Kramer is the "C" in Packers.

Wow.....You referred to her as "Boss". She's got you trained! In the immortal words of Bill Clinton, "I feel your pain".
That Britt auto just looks so SLOPPY~

Nice break, although I agree the rookies are dumb since it was released so late. 2008 Icons had all pro unis.

And major congratulations on having a wife who demands boxes come home with you. Mine barely tolerates it. My only saving grace is I have been recooping some of the money by selling off singles on eBay...