a box break meant for somebody else...

You ever buy a box of cards, rush home, rip into it, and at the end felt a little let down because you knew this box was meant for someone else? This just happened to me. And I feel a little let down over it too. I've seen dozens of box breaks for this product on the various forums, all with cards I've drooled over... but not this one. This one was meant for someone else.

But let's get back to that later. First up the standard review. Of what? Why 2009/10 In The Game Between the Pipes of course. For a refresher on last year's version, go to my review HERE. It went a little better than this year.

The base set is divided into four subsets.... the first, Future Stars. These are the guys that either have been drafted in the last year or two, or are about to be this summer. I chose Leland Irving as my example. Why? Well he's the Flames heir apparent, and if Kipper keeps playing the way he did this morning, we may be seeing Leland sooner than later. 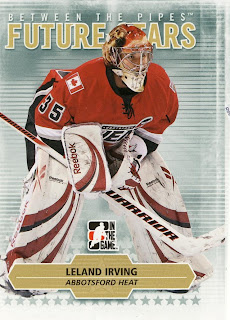 Stars of the Game features today's current players, this year in a "painted" look. Here's Marc being told that if he agrees to take a quick vacation in Vancouver, talk to some pretty girls, and generally smile for the cameras... they'll pay him with a Gold Medal. No catches. 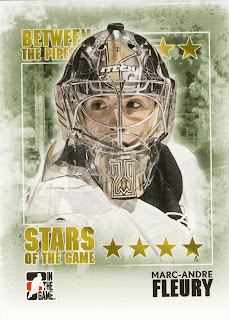 Next we have Greats of the Game. Some cool cards here... although some duds as well. They may have tried too hard in expanding the checklist. Allan Bester? Grant Fuhr? Putting these against the likes of Johnny Bower and Georges Vezina is close to sacrilege. 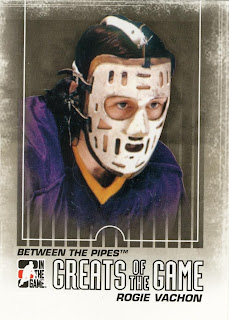 I know you are all wondering how you get a nick name like Rogie. Well, if you have a name like Rogatien, you gotta be called something.
and last but not least, in my opinion, are cards from "The Rival League" We're talking WHA here people. 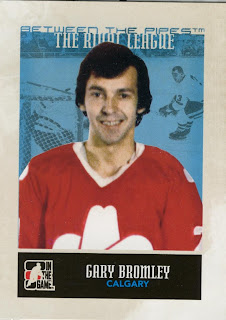 Gary "Bones" Bromley from the Cowboys. Yes Flames fans, Calgary had a pro hockey team before we borrowed one from Atlanta. You all just never went to see them, so they left. Shame on you! You go to the penalty box, you hang your head, and you feel shame!
That takes care of the base set, now onto the inserts... There are six insert sets to chase. The first five on the list fall at 1:8 packs combined. The Masked Men fall at 1:8 themselves.
1. Gold Medal Masks. - didn't get any, although I did win one over at Cards On Ice!
2. Martin Brodeur Tribute - pulled 1
3. Net Brawlers - didn't get any
4. CHL All Stars - pulled 1
5. AHL All Stars - didn't get any
6. Masked Men - Pulled 3


First up, my CHL All Star 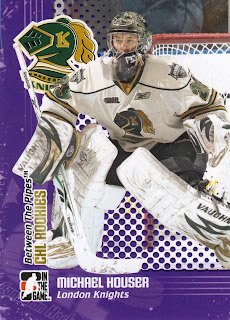 Then my Martin Brodeur tribute. There are several of these, mine is #6. Get used to seeing Marty... he owns this box. 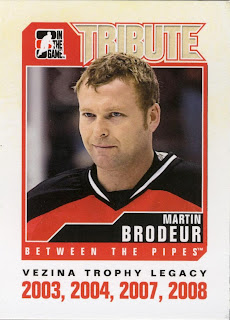 Masked Men - Tim Thomas (I bet a lot of card companies are wishing they hadn't jumped on the bandwagon of this flash in the pan backup....) 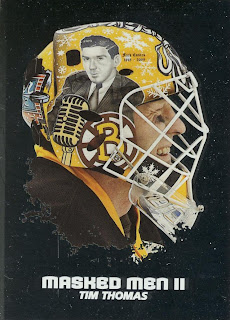 Martin Brodeur (again, but not the last Marty insert) 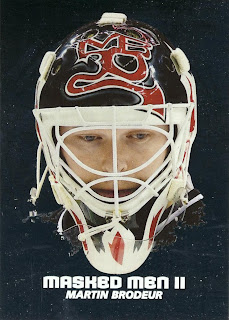 Ilya Bryzgalov. If the voters vote with their brain cells, and not their ass, Ilya will be league MVP at the upcoming Awards Ceremony. 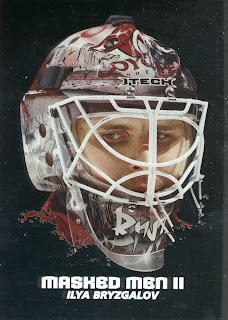 Next up we have the autographs. Seeded 1:8 I pulled 2. It's always fun to pull these and wait to see when/where they get drafted... 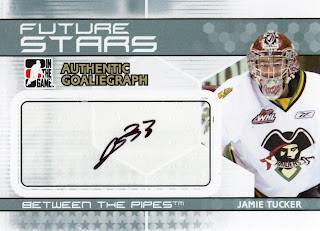 wow. Jamie Tucker, although I have never met you, you sir, are a Douche. A Douche of the highest standing. How often do you see someone's jersey number being 2/3 of their signature?
Show some pride you cockknocker, at least pretend you went to school.
Your auto makes the next one look like calligraphy. 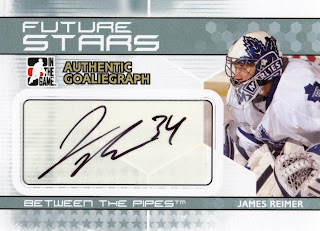 James Reimer, the Leafs future saviour. Good luck with that James. Work hard and someday you too, may have a career that rivals Allan Bester. 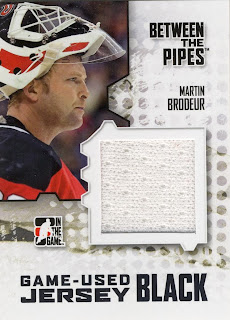 Somewhere in Calgary is a Brodeur super collector. In two boxes, purchased at the same shop as mine, he pulled nothing. Not one Brodeur. I now know why.


And we end with Chris Osgoods goal pads /60 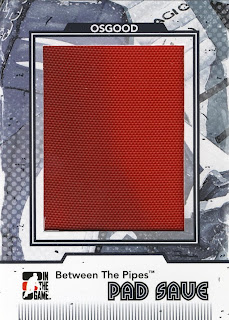 Pretty cool stuff, but not of a dude I collect. None of these are dudes I collect. Story of my life.
Now if you'll excuse me, I have some base cards to sort and put in pages.
Posted by Captain Canuck at 6:53 PM

You always make me wish I collected hockey. Or at least knew the first thing about it. I think I would like hockey.

I know it involves icing somehow. And I love me some icing. Very tasty.

Try it on cake.

Thank you thank you.

I'll be here all week.

Make sure to tip your waiters.

I like the Osgood pad card, if you'd be willing to trade I have some Tommy Hanson RC's and other braves stuff you might like. Shoot me an e-mail at redwingshockey82 at hotmail dot com . Thanks.

That box definitely went to the wrong place. Let me see what I can dig up for you.

Normally I like the Stars of the Game cards but those Greats of the Game look even better. I do like that Fleury though.

*pitter-patter-heart-sigh* ITG is so great...

If you so happened to have unfortunately received any cards of that bum named Dustin Tokarski feel free to send them my way. I know you don't need him mucking up your collection. :)

Love Between The Pipes!

On a side note, my blog www.canadacardworldblog.com has been nominated for the Upper Deck Blog Awards. If you're interested in some free sports cards, please visit our site, follow the simple rules, and maybe we both can win!

Is the Howser card for trade?

I wish I could spell.