Trading with Beardy, and a poll... Fun!

First off, I am soooooo behind in my trade posts... I'll catch up, I promise.
anyways, awhile back I posted my doubles list for '09 A&G and Beardy was one of the first to respond. I had a SP he needed, and he happened to have two SP's that I needed. Done. Simple.
No? As usual, it went a little further. I sent him some crap (Orioles) and he sent me some awesome cards! (Braves) Both extras that the other didn't know about.
But while we were chatting online, I mentioned I had an '09 Ginter auto of Rich Hill (Orioles) I told him I'd throw it in for any auto, no matter the team. I could always trade that to someone else.
After some thought (this IS Beardy we're talking about) He remembered he had an auto of someone who plays for Atlanta. 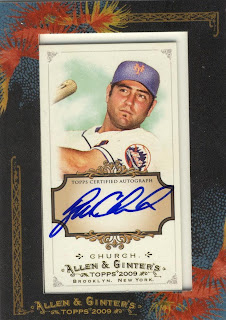 Yes. Ryan Church. In a Mets uni. *sigh* Sure dude. Done deal. A little more chatter, and the bearded one says, "wow. do you think there ever was a more craptastic trade?"
Let me see... the weakest hitting outfielder in the National League wearing a Mets uni, traded to a Braves fan for..... well...... Rich Freakin' Hill.
No. Never has there been a worse trade of more useless crap.

I'm going to be away for a couple of days... (don't get any ideas, I have my attack kitty standing guard) so I'll leave you with this.

Who got the crappier end of the trade?

Posted by Captain Canuck at 7:54 PM

Rich Hill used to be a freakin' Cub. And now he's a member of a team with a 13-game losing streak.

I love Rich Hill (just actually traded for him haha). So I'm gonna say you got fleeced.