That's right, Thursday Night Football. Doesn't quite have the same ring to it, but maybe in 25 years it will.
The 2009 NFL season is upon us, with th eopening matchup featuring the defending Super Bowl Champion (Boo! Arizona got robbed) Pittsburgh Steelers vs. the Tennessee Titans live from Pittsburgh.
That means several things. First, you won't be seeing any of this: 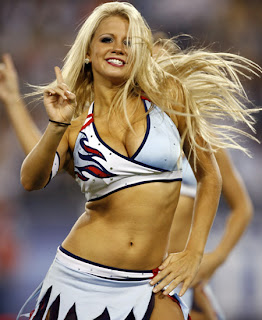 She is still in Tennessee. But you won't be seeing any of the Steeler variety either. I've never been to Pittsburgh so I'm not sure, but maybe there aren't any young, hot girls who can dance?
Maybe they're all working in the steel mill... a quick google images search (btw, DO NOT google image search Steeler Cheerleaders... you'll be scarred for life) shows that there are, in fact, Pittsburgh Cheerleaders that will come to your Steeler event. But they are in Tampa, Florida. 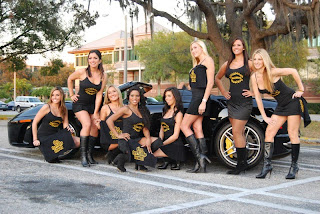 Doesn't say much for Pittsburgh, does it?
But back to the game. Since the NFL went to this opening thursday night format, the home team has won 6 of the 7 times. Advantage: Pittsburgh. The last time these two teams played last year, a couple of Titans took to stomping on the Steelers beloved Terrible Towel. Like the fans need a reason to get pumped up. Advantage: Steelers.
Final score tonight: Pittsburgh 27 Titans 17
Posted by Captain Canuck at 9:17 AM

Thanks for the picture. Now don't update for a week or so. LOL!