Spending the Night Before Xmas with Harry Caray

Posted by Captain Canuck at 11:37 AM No comments:

It's video week here at Waxaholic. Yeah, I'm phoning it in, but it's xmas... sue me.

Posted by Captain Canuck at 1:32 PM No comments:

Booty Boogie of the Day...

Jacob Markstrom, future star goalie for the Florida Panthers, seen here playing for their AHL affiliate, the San Antonio Rampage, keeping things loose during a stoppage in play to fix a broken pane of glass.

It's no Ned Braden.... but it's not bad. Glad to see that some athletes still play for the fun of it.
Posted by Captain Canuck at 4:02 PM 2 comments:

It's been a long time since I bought a box of cards. If you subtract hockey from the equation, it's been almost 2 years since I've bought a box of cards. I think other than 2010 Topps Chrome football, it was 2009 Ginter for baseball.
Yeah.
I've been feeling what a lot of you have been expressing towards the latest offerings from Topps.
Meh.
And until they get their act together and release something worthwhile, I'll concentrate on my wantlists for vintage baseball, and buy other offerings from other companies who aren't just phoning it in.
One of those companies is Rittenhouse. While you will never find a Chipper Jones or Josh Hamilton in anything they do, that doesn't mean it isn't worth checking out.
I've always been a fan of non-sports cards. From the Star Wars release in the late '70's to the great sets out today. I've enjoyed seeing sets of movies and tv shows that I've watched.
Today's box break is of Star Trek: The Next Generation The Complete 1987-1991 Series One.
This is limited to 6000 waxboxes. Each box has 24 packs, 6 cards per pack.
The base set is 90 cards (including two checklists) and covers the first half of The Next Generation series run. Series Two, which will be released in February, 2012, will cover the latter half of the series in another 90 card set.
Each base card features 5 full colour pictures. Yes. Five. The fronts look like this.... 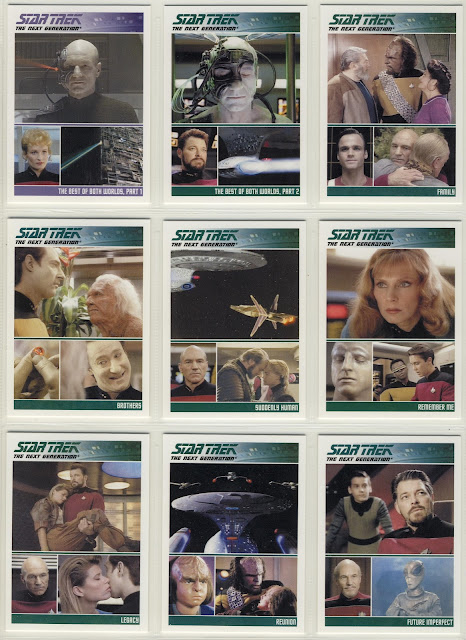 I really like the feel of these cards as they are not the typical full high glossy lacquered card you find in most sets today.
Each base card tells the story of one episode. A summary, as well as two more pictures, appear on the back. 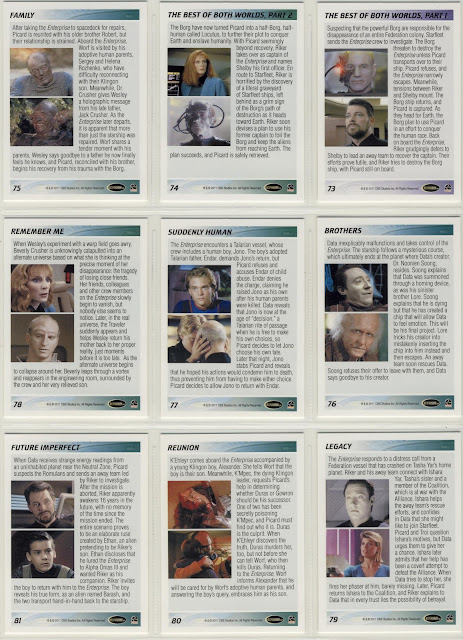 I really enjoyed sitting down after putting them in pages and reading the backs. Something I did as a kid with my sportscards, but manufacturers have all but eliminated. Did I mention you always get a full set in a box?

There are four different insert sets to chase. They have a foil front parallel set at 1:3 packs. 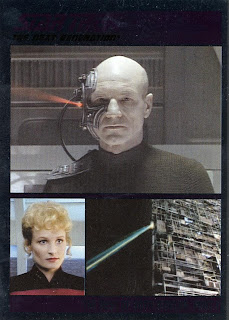 An 'Aliens' insert, featuring, in alphabetical order, every alien race shown in the series. There are 13 different cards at 1:8 packs. Each card feautures 6 alien races. 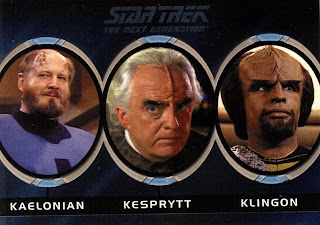 A 'Tribute" series, 18 cards featuring those actors that have passed on in the years since. 1:6 packs. Can you believe it's been 25 years since Captain Jean-Luc Picard first appeared on screen? 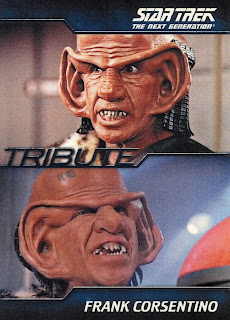 Nine cards showing off artwork of one of the main characters. The U.S.S. Enterprise NCC-1701-D. 1:9 packs 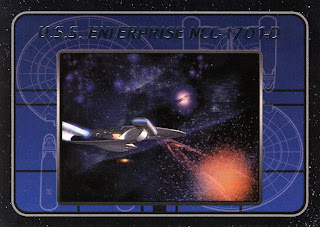 But the real allure of the set, besides those awesome base cards, are the autographs. You get four per box.
Rittenhouse has different levels of autos in this set. Very Limited, Limited, and Normal.
Very Limited is around 200-300 total available. Limited is between 300-500. Normal is listed as 'Over 500'.
Knowing how many boxes/packs etc are available, I figure if everything is equal and balanced, Normal means around 580.
Rittenhouse changes the checklist of their autos from set to set, so not all of the cast is available in this series. Out of the "big" characters, Data, Doctor Crusher, and Commander LaForge are in Series One. I didn't get any of them. Surprise!
I pulled two Normal and two Limited autos in my box. None of the big names, but some memorable characters. 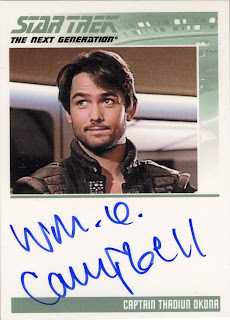 William O. Campbell came on board the Enterprise and in less than five minutes had a young Ensign Terri Hatcher in the sack. Well done sir.
Now known as Billy Campbell, he's starred in Once and Again, The 4400, and The Killing 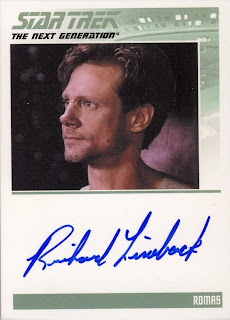 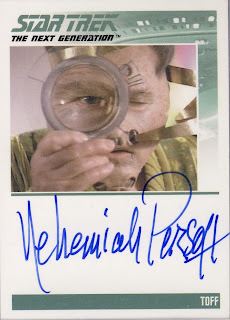 Nehemiah Persoff is 92 years old and retired in 1999. He's been in so many shows I couldn't possibly list them all. You all know who he is, if not, IMDB or google is your friend. 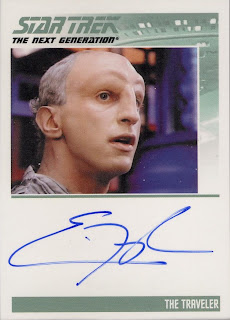 My best auto, character on the show wise, was of the mysterious Traveller. This is the dude that kept popping in every other year to help Wesley Crusher evolve into an energy state. One of the more obscure plotlines of the show for sure.
Played by Eric Menyuk, who was the runner-up to play Data. Eric is now a trial litigator in Los Angeles where, according to his firm's website, "he has been keeping the world safe for Fortune 500 companies."
I think that's lawyer-speak for he's rich with a nice car and even nicer house.

Anyways... I had a blast breaking this box... so much so I'll definitely pop on Series 2 in February.
Posted by Captain Canuck at 8:40 PM 5 comments:

so today is December 5th, 2011. Which happens to be Jim Plunkett's 64th birthday. I was planning on doing a post sometime this week on Jim, but Hackenbush's "You Can't Have Too Many Cards" told me this morning that it was his birthday. So we have to quickly adapt and move plans forward a bit.
At the last trade night I went to, I picked up a few 1976 Topps football cards out of the Quarter box.... er... Quarter binder actually.
One of them, surprise!, was Jim Plunkett. 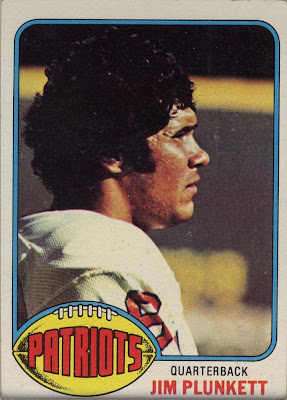 Now some of you out there may not know who Jim Plunkett is. Let me enlighten you on someone who deserves the recognition.
Jim is a guy who worked four part time jobs through junior high school and high school to help with the familie's financial situation. His mother was blind, and his father, due to a medical condition, was going blind.
Jim earned a full scholarship to Stanford University where he would play his college football.

Despite being encouraged by the NFL to come out early after his junior year for the NFL draft, Jim stayed in school for his senior year to be a good role model to the grade school kids that he tutored in his spare time.

Plunkett was drafted first overall by the Boston Patriots and set rookie records for touchdown passes his first season.
Jim ended up being traded to San Francisco for their starting QB, three 1st round picks, and a 2nd round pick.

Fast forward a bit, towards the end of Jim's career. It's 1981 and Plunkett is a backup with the Raiders. Due to an injury to starting QB Dan Pastorini, Jim took over the starting job and guided the Raiders to 13 wins over the next 15 games, including four in the playoffs, to lead the Raiders to a Super Bowl title in Super Bowl XV, becoming the first 'Wild Card' team to win the title. Jim also took home Super Bowl MVP.
Three years later, another injury to a starting QB, this time Marc Wilson, had Jim leading the Raiders into the playoffs once more, and once more winning the Super Bowl, defeating Washington.

Anyways... if you've stayed this long, I thank you. And next time you see a Quarter box, or binder, give it another look. You never know what you might find. There's some interesting stories hidden away in there.
Posted by Captain Canuck at 10:33 AM 7 comments: