a wee while ago, Matt from Cardboard Conundrum had a group break. Unlike a lot of the group breaks out there, he wasn't trying to make a profit. He just wanted to have some fun. He offered up 6 boxes of 2012 product. Topps Heritage, Topps Archives, Topps Jumbo Series 1, and Jumbo Series 2, as well as two boxes of Gypsy Queen. Your choice of teams for $20 shipped, later reduced to $15.

With me not busting any boxes of baseball anymore, the opportunity to pick up almost complete team sets of my Braves from all of the 2012 product in one scoop was too good to pass up.

Relax, I won't show you every card I received, but a few highlights. You know how I like pictures. 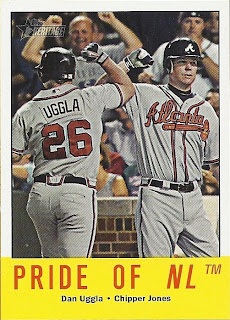 Pride of the NLTM. Uggla and Jones. Damn am I gonna miss Chipper. 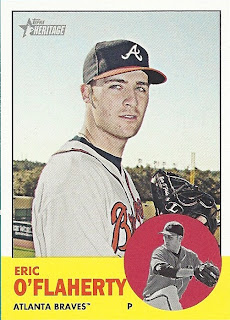 Did you know that in 2011, Eric O'Flaherty became the first pitcher in the history of baseball to appear in over 70 games and keep his ERA under 1.00? With Eric in the 7th, Venters in the 8th, and Kimbrel closing the 9th.... you had better be ahead after 6 if you wanted to beat the Braves last year.

Here I'll show every card I got since I hadn't seen Archives in person yet.... plus I didn't get that many. 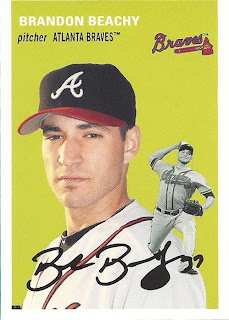 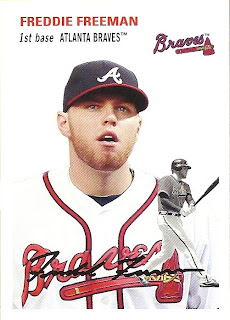 Freddie on a really white card.... and his buddy Brandon. (oh Brandon, what could have been) 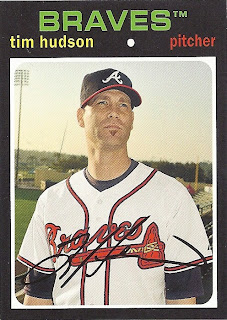 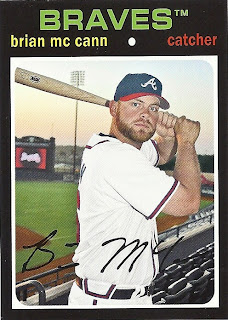 BMac and Huddy from the same photo shoot as the Heritage cards. Ahh... Atlanta at sunrise. 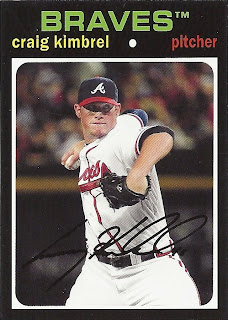 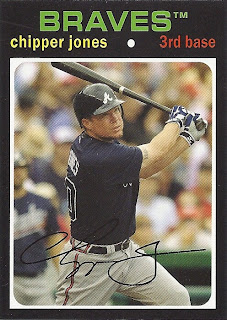 The past and the future. Chipper and Kimbrel. 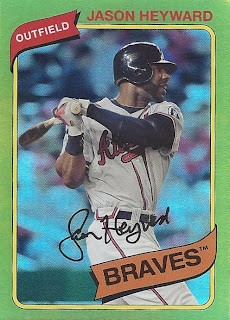 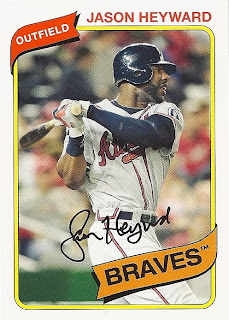 here's my first 'hit'... a Jason Heyward gold foil parallel that my scanner doesn't like. 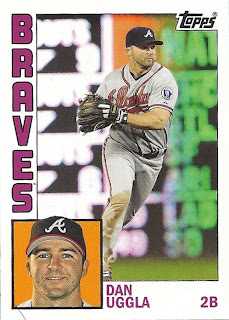 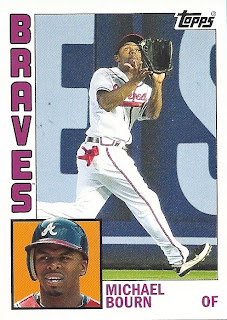 Speed and Power. Hopefully we see more of both... and soon.

I got quite a stack of these cards. But I had to show off this one. 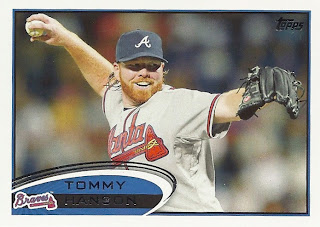 it has to concern a batter to be looking out at the pitcher and seeing this maniacal smile coming back at you. 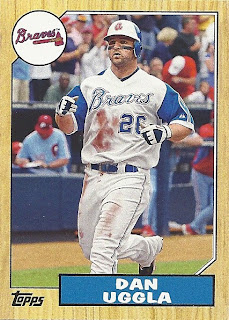 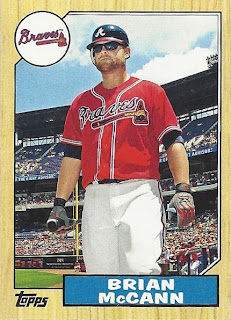 ended up with three of them. 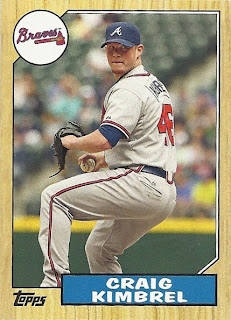 These go great with the ones I already have, Heyward and Bourne. So I just need a couple more I think???? Chipper probably? I have no idea who's in the checklist.... anyone?

And now my second hit. A Randall Delgado autograph. 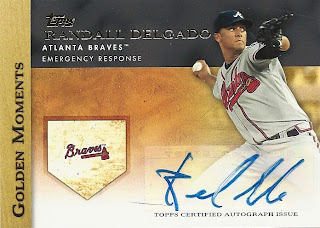 Thank the gods Dempster said no. What in the hell is Frank thinking???????

I also received 30 Braves base cards from both series, as well as 8 inserts. Not bad. 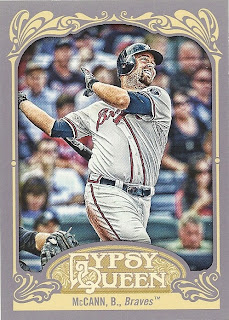 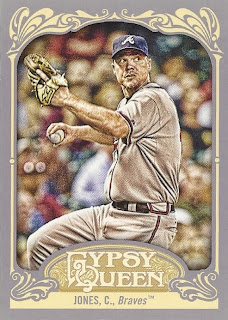 you knew Chipper was making an appearance along with his hunting buddy. 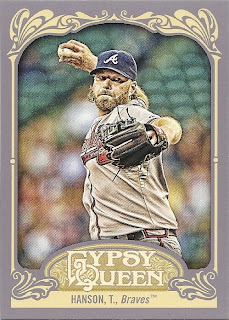 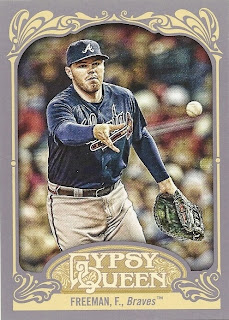 someone needs to remind Freddie to catch with his glove. That's what it's there for. I showed the big version of Tommy to illustrate the mini variant I got. At least I think it's a variant. Maybe. 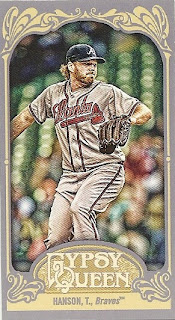 I got three mini's out of those two boxes. I'm not sure if that's good or not. 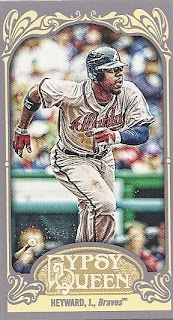 one of them was this crooked Straight Cut back of Craig Kimbrel. The irony is not lost. 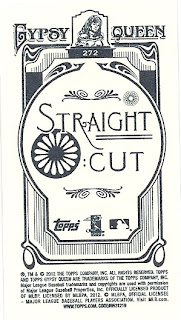 Here's where my luck really took off. 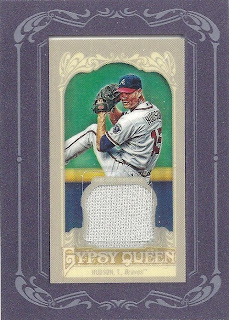 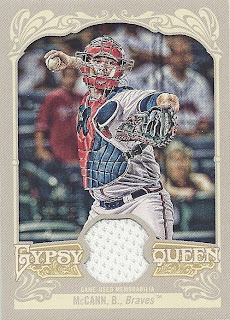 AND an on card auto of future Hall of Famer, John Smoltz. 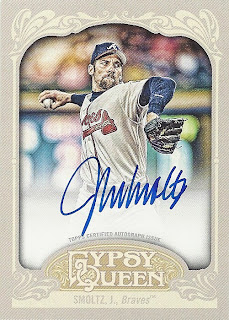 as well as 20 Braves base cards. No inserts. But I don't think they are in any of the insert sets. I think. Maybe. Hell I don't know.

If you are in need of any Braves base cards from this year, let me know, I may have dupes. Maybe we can swap for ones I need. IF I can figure out what I need.... that may take some doing.

I'll tell you what. Matt included a Golden Giveaway code card. (I'm assuming unused) The first person who offers up a card off of my wantlist gets the code. Any takers?
Posted by Captain Canuck at 11:55 AM 2 comments:

Most Overrated players in MLB

Sports Illustrated magazine polled 228 MLB players to vote for the most overrated position players in baseball. The results....

Yanks take 3 of top 4 positions. Seems if you have an overrated player, stick him in RF or 3B.....

What say you?
Posted by Captain Canuck at 4:19 PM 7 comments: