At the last card show of the year I managed to pick up some baseball cards. Hard to believe, but there was a couple of sellers there with baseball cards.
Of course, the one list I forgot to bring was my vintage Topps Braves wants/needs. No matter, carry on.
1958 Joe Adcock. These first 6 cards cost me $15. Not great, but something about beggars and choosers comes to mind. 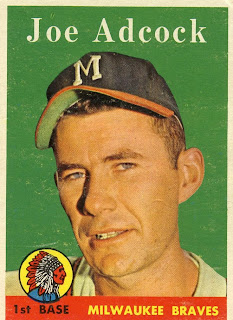 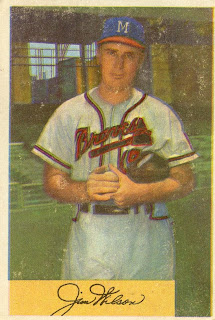 I was thrilled to add this ultra rare sideways variant of this 1972 Hank Aaron card. This could also qualify for Night Owl's badass club in my opinion. 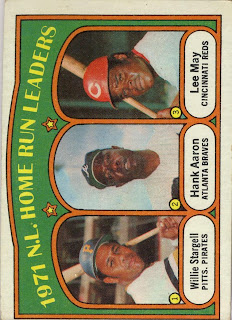 A 1955 Gene Conley. And I already have it. Always bring your lists kids. 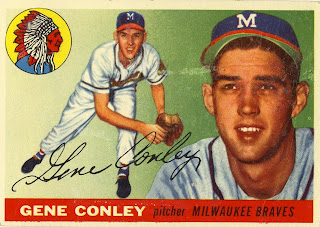 a 1975 Topps Mini of Johnny Oates. And I already have it. Always, ALWAYS bring your lists kids. 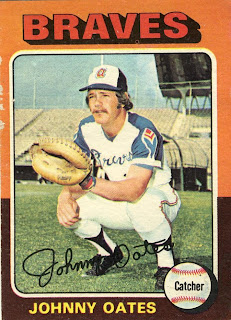 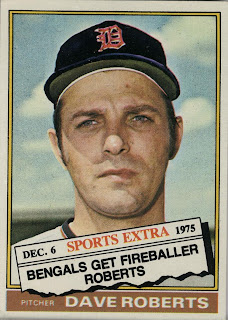 I got these next two cards for a $1 apiece. Both black bordered Braves from 2009 OPC baseball.
Brian McCann and 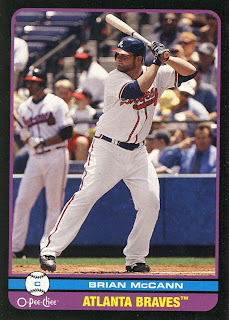 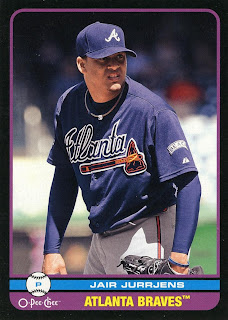 These next two cards were gifts from two different attendees.
First, a John Smoltz that you can literally use as a mirror. The scan does not reflect that (see what I did there?) But it is that shiny and smooth. 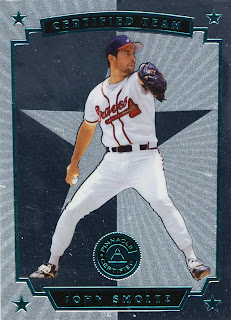 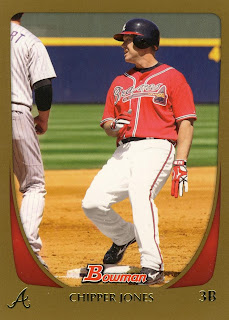 I also got a few vintage cards not seen here, but they have been mailed off to other bloggers. Or soon will be.
It was great to be able to browse some old baseball cards again.
Posted by Captain Canuck at 6:03 PM No comments:

Sothe other night was trade night at Maple Leaf Sports, my local card shop. I'm not even going to make jokes about it being 45 minutes away in light traffic. This is serious business.
2011 Bowman had made it's appearance. And believe it or not, there are a few baseball collectors coming out of the woodwork up here in the Great White North. Especially the hit chasers.

The jumbos got ravaged first. I had thoughts of picking up a box. Just for the Braves. And some guy named Stras... Harper. But by the time I cleared the mothballs from my wallet, all the jumbos were gone. Sold. Cracked. Wrappers everywhere. A bunch of hockey collectors walking around confused why they don't see ice or skates on these guys....

So my buddy Mike stepped up and grabbed one. A few packs in he pulls his auto. Yeah, if you've been paying attention, it was Bryce Harper chrome rookie auto.

Euphoria ensues... the heaven's part, angels are singing, doves are let loose as everyone gathers around to see the magical card that has just paid his next two months mortgage payments. As Mike goes to show off his prize, and if you've been paying attention to the title (look again if you need to, now back to me), he notices another card stuck to the back of th Chrome Harper auto.

Make that his next 6 mortgage payments.

Surprisingly, Mike made it out of the shop safely.

If anyone wants to see the magnificent glory that is The Harper. Please check out Maple Leaf Sport's Hit blog.... HERE. You can magnify the pic if you dare by clicking on it.....
Posted by Captain Canuck at 9:40 PM 4 comments:

The End of the World Prevented....

So the Rapture, the end of the world as we know it, didn't happen as widely predicted. Randy "Macho Man" Savage, left us yesterday in a tragic car accident.
Coincidence??? 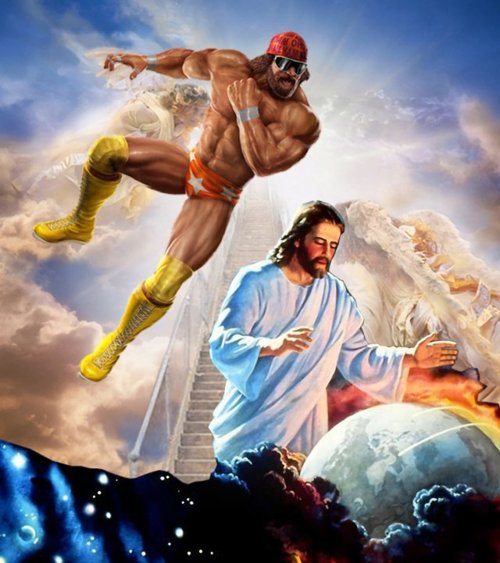 well this has nothing to do with them. But it does have to do with an insert set called Team Six from 2005 Absolute Playoff Baseball. A couple of weeks ago the owner of my local card shop went to the Expo in Toronto. I talk like I know what the Expo is, but I have no idea. All I know is that the card manufacturers are there as well as a whole mess o' dealers. So it's basically a big card show on steroids. I think.
Anyways.... Darren came back with little gifts for all of his best customers. And for some reason he brought me something too.
Here we have the best top 3 pitching rotation in baseball. Damn I miss these guys. 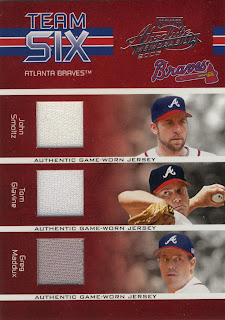 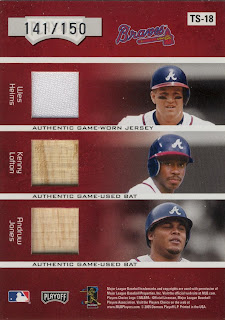 And here it gets even better. How's this for a 3-4-5 in the batting order? Chipper, Murph, and Andruw. Awesome. 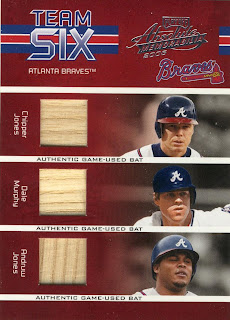 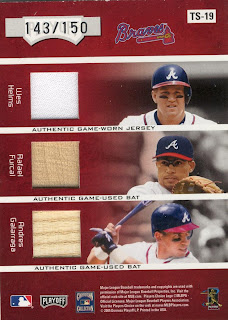 Really cool cards from an era when I wasn't collecting. Even if I was, I would have never pulled these....

But here's where it gets complicated. Do I put these cards in my Chipper box? My Glavine box? My Smoltzie box? My Andruw box? My Maddux box? Seriously. I have monster boxes devoted to each of these guys.

Thanks Darren!
Posted by Captain Canuck at 9:21 PM 2 comments:

Most if not all of you know who Ned Braden is. He was the star player in the greatest sports movie ever made, Slapshot. Ned had a small problem. He was an outstanding skill player on a team of goons. And he refused to play the goon game. Despite being their best player, coach Reggie Dunlap benched him until he played a 'team game'. 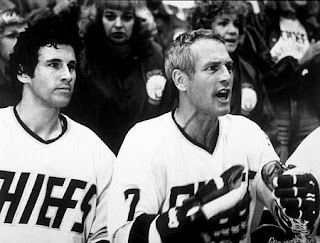 May I introduce you to Mr Tyler Seguin. The modern day Ned Braden. The #2 pick behind Taylor Hall has been a healthy scratch more often that not. Including every playoff game except the last two. Coach Julien says he "has not learned the Boston style of play" and... " he will not play the Bruin way." What he means is that Tyler.... 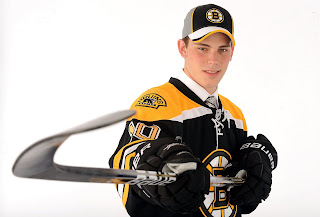 will not play like this. Dr Hook Tim McCracken. 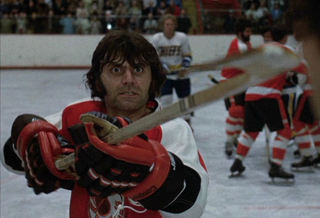 His hand forced by injuries, Julien hasa let Seguin play despite his lack of goonery... and Tyler has responded by scoring 3 goals and 3 assists in 2 games. By far Boston's most talented player, Tyler electrified the home crowd during a 4 point second period tonight on route to a 6-5 win over Tampa Bay.

Coach Julien has said with Patrice Bergeron returning for game 3, it's no guarantee that the inexperienced youngster will play.
He better.
If Boston wants to beat the more talented Lightning, they had better play Seguin, and they had better ride him the whole way.

Because if Tyler gets tired of the zoo.... it can only lead to this.... 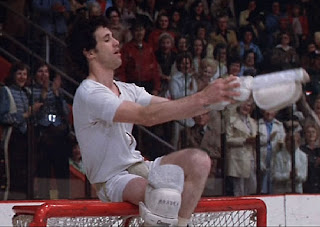 and I'm just not ready for that.
Posted by Captain Canuck at 9:17 PM 4 comments:

Dustin Boyd of Hamilton ends the game and series 6 seconds into the third overtime period. Awesome.

Gus Johnson, eat your heart out.
Posted by Captain Canuck at 1:00 PM 1 comment: