one of the local card shops has giveaways at their version of trade night. It could be anything from boxes or packs of cards to autographed baseballs to licenced merchandise.
I've won a few of those prizes.... it's always nice to get free stuff. On one of those nights, I was handed a package and told, "Take this home.".
Upon opening it I found a McFarlane version of the one, the only, Chippah! 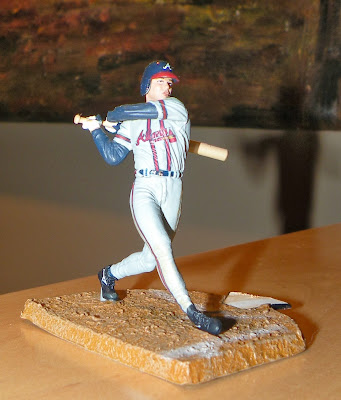 Very cool. I didn't have it already, so it now sits on my desk, proudly hitting a home run to beat the Mets in Shea every time I look at it.

The only problem, and it isn't really a problem at all, is that Chip came with a buddy. 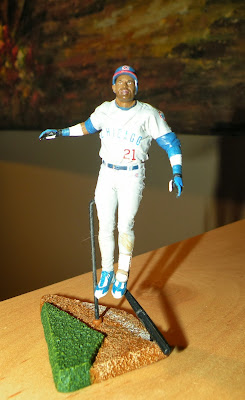 Who knew at the time that the reason he was always hopping around was that he was hopped up on 'roids.
I always thought it was because of the cork. But whatever....

Long story short.... Sammy needs a good home. Is there any Sammy and/or Cubs fans out there who would like Sammy for their desk?

All it will cost you is at least one card off of my wantlist. That's it. AND... if you really want it, but can't find a card, I'll send Sammy your way for futures.

Thanks for coming out! Here's a prize...

the past couple of trade nights at one of the local shops have brought more than just trades or disappointing box busts... they've brought freebies!

now you know how much I like free. If it's free, it's me.

The shop keep likes to hide little gems under the desk for his patrons, and I was the lucky recipient of a goodie each of the last two trade nights.

inside of it, this was hiding...

BMac! And a sad Dee Gordon sad that he hasn`t lived up to the hype that Topps put on him.

Here`s the back for posterity. Weird that we`ve got the back of Justin Verlander`s card instead of John Jaso.... but Jaso never rang Kate Upton`s bell, so there`s that.

This past week brought another treasure. A Jason Heyward Studio card form some sort of Panini pack giveaway that I knew nothing about. This doesn`t surprise me as I tend to not notice things like this. 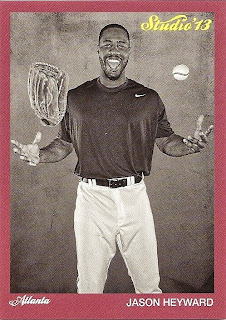 and why on Earth would they reproduce this Studio set??? One of the worst sets of all time! Leave it to Panini I guess.

Oh, and there was also this parallel of the Jason Heyward card. 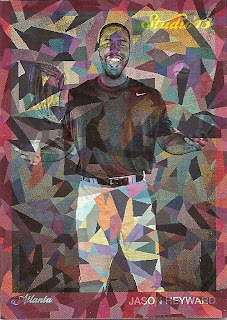 Great googly moogly. What is that?

I have no idea.... but in the Heyward binder it goes.

Thanks Darren!
Posted by Captain Canuck at 2:55 PM 1 comment:

so on Tuesday, October 8th, I posted about busting a box of the new shiny Topps Chrome baseball. Of course, it was missing one of the promised autos.
On Wednesday the 9th, I emailed Topps customer service with all of the requested information and attached scans of the upc symbol etc.. as instructed to do by Topps' fantastic website.
Later that day I received an email that they couldn't open the attachments. Apparently .png files are too modern for their software. So I switched to .jpg and re-sent.
The next day I received an email saying the attachments were too large. Apparently 2MB scans will overwhelm their servers.
So I reduced the resolution and re-sent.
Again.
I then received an email the next day (the 11th) asking me to send my letter and scans to a different email address within Topps.
Apparently Topps' software does not have a "forward" button. Or a "copy, paste" button either. They must be using Macs or some such useless crap.
So I did my own copy and pasting. And re-sent (for the fourth time) my request to Topps.
Now in my letter, I mentioned that I was a Braves fan and if they possibly had one of those, I'd be really grateful.
I, and a lot of other people have dealt with Upper Deck and they always ask your collecting interests to best match up a replacement whenever possible.
This isn't Upper Deck.
On Wednesday the 18th, FedEx showed up at my door at 2 pm.
I wasn't home. however they left a nice note saying they would try again and 2 pm the next day.
I wasn't home again. Who delivers residential in the afternoon when a signature is required?????
This time they left a not so nice note saying my package would be held at a really inconvenient location nowhere near my home or work until Saturday, where it would then be returned if I hadn't picked it up.
Great. One day to get it or else.
Oh, and pick up times at this remote hell hole are between 1:00 and 4:00 pm.
Apparently FedEx has a sense of humour.
Skipping to the chase, Topps immediately replaced my missing auto. Kudos to them for doing so in a timely fashion.
However..... 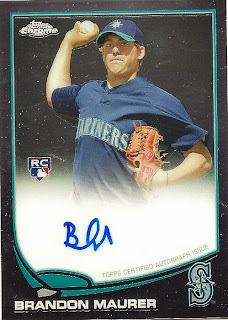 These babies can be had for $1.50 on Check Out My Cards. Why? Because the Mariners don't have fans or people who collect them. That's why.

I can't complain really. Other than the inconvenient way of shipping, the time off of work to get the damn package, and the fight with Topps' customer care department, everything else went smooth.

Now I just have to locate Brandon Maurer's grandma and trade her this card.

So at the last trade night I caved into peer pressure. My drug of choice? Shiny 2013 Topps Chrome.
It was either that or Shiny 2013 Bowman Chrome. Why did Topps put out two nearly identical products in the same week??? Who knows? They have a monopoly, so they can do whatever they want.
A couple of friends of mine spent about 10 minutes talking me into busting this box... I think it was because they wanted to see one but didn't want to splurge themselves........... Hmmm.......
Anyways, you all know about The Shiny. 24 packs, 4 cards per pack, and TWO autos GUARANTEED per box. (that's called foreshadowing kids)
I only managed to pull three Braves in the box, so you're going to get to see them all.
This is the first card of El Oso Blanco that I've pulled from a pack myself. 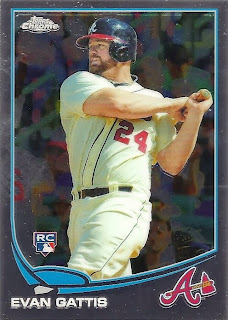 Evan became the first player to win back to back Rookie of the Month since Jason Heyward in 2010.
It'll be a tight race between Evan and Jedd Gyorko for rookie of the Year. I think Gyorko will win it though.... too bad, evan had a helluva year. The most RBI's by a rookie, second by two in homers to Gyorko.

BMac! Maybe the last card of Brian in a Bravos uni.... 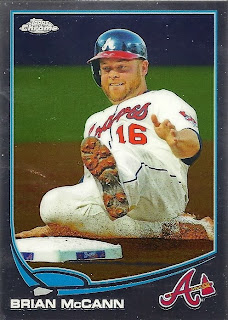 Of course, what are shiny cards without even shinier cards? Refractors everywhere... 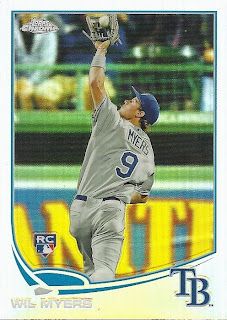 And of course, Xfractors.... that black line is not visible on the card itself, but every Xfractor I pulled scans this way. It looks like a fault in the cards... there's a line on the card that looks like it's missing the Xfractor dust. 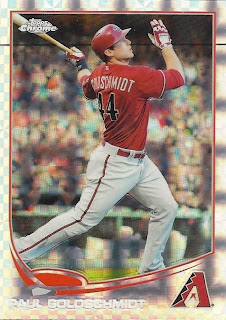 There are coloured parallels as well.... purple, red, orange, black, gold, and blue. Maybe more, I dunno. I got one gold, and one blue in my box. 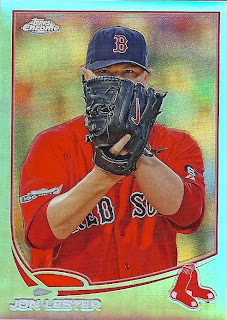 The scan of my gold parallel seems to have disappeared into the depths of the world. Sorry, my bad.

As for inserts, we get more of the 1972 reprints. I got two in the box, Pujols and Jason Heyward. 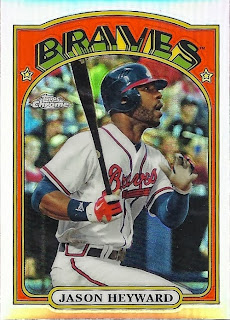 Topps also made a couple of odd die-cut insert sets. I pulled three of these monsters... Ortiz, Lincecum, and Gonzalez. Very colourful.... it's like the 90's again. 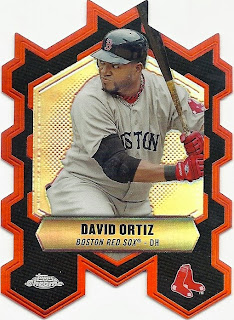 And then this thing.... the only one in the box. Evan Longoria. 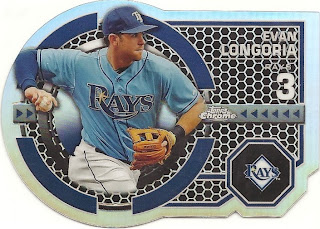 Now we get to the autos. Or should I say, auto. Yeah. In big block red letters it's printed on the box THREE times, TWO autographs per box.

But, at least I got the probable rookie of the year, the previously mentioned Jedd Gyorko, on a  black bordered card #/100 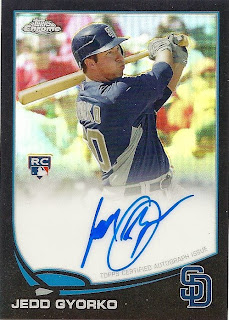 Now to email Topps about my missing auto.
Anyone out there have experience dealing with Topps??? Sound off in the comments if you have any tips.
Posted by Captain Canuck at 11:08 PM 3 comments: