At the card show this past weekend, as soon as I walked in the door, two of the sellers called out my name and beckoned me over.

It's nice to be wanted.

Both had cards saved for me that they knew I would want. I'll show off the lone baseball card I managed to pick up over the weekend now. 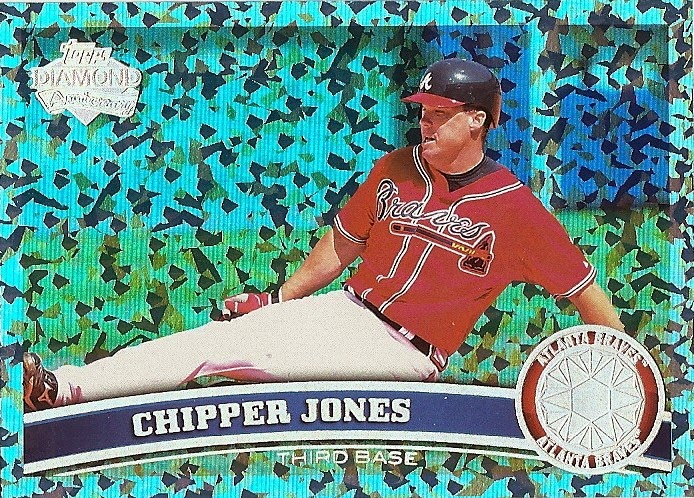 I love me some Chippah!

This is one of those Hope Diamond things from Topps. Or is this the Blue Hope Diamond? Did they have other colours? Did the liquorfractors count?

Whatever. This one just happens to be numbered JerseyNumber/60

Even better than acquiring this beauty was the price. Yeah. Free. All I had to do was answer a trivia question ... "What was Chipper's jersey number?"

I love this hobby.
Posted by Captain Canuck at 12:04 PM No comments:

While we all anxiously await the 2014 FIFA World Cup, there's a lot of goings on in the Premier League.

Mauricio Pachettino has resigned as coach of Southampton, and has taken the same position with Tottenham Hotspurs. A rather curious move... I guess money talks.

Several players have already moved in the summer transfer window, but I suspect the majority of movement will came after July 13th, the end of the World Cup.

As every other year before this one, 2014 marks the good-bye to the bottom three teams who have been relegated down to the Championship.

So long to one of my favourites to watch, Norwich City.

Norwich had been in the Premier League for the last three seasons.


Old friend Fulham goes down after 13 consecutive seasons in the top tier.

And newcomers Cardiff City go right back to where they came from after only a season. Their first ever appearance.

But with the sadness of seeing them leave, we welcome three new clubs to the party. Promoted from the Championship to the Premier League, say hello to ..

Leicester City. The Foxes last made a top flight appearance in 2003-04. 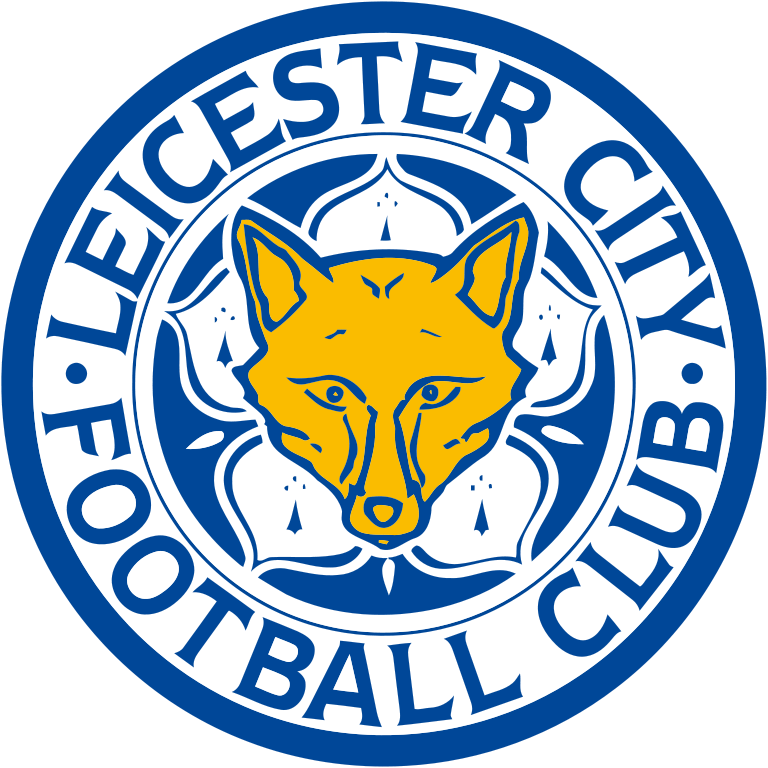 Burnley. Finishing second in the Championship has earned Burnley a place at the table, their first since 2009.

and finally Queens Park Rangers. QPR beat Derby County in a playoff by scoring a goal in the 90th minute to win 1-0 and secure their place after only one season away.

I look forward to the new 2014-15 season and to the busy off season ahead.

and as always, Go United!
Posted by Captain Canuck at 2:01 PM 3 comments:

and to prepare ourselves, let's dive into a little Panini Prizm. You were probably expecting stickers... but I'm not quite done my book yet. Only about 65 to go.

So until then you get Prizm.

Back in 2010, Panini put out one of the best card sets of the modern era for the World Cup. I loved it. I never did finish the set because boxes and packs dried up so fast. (if you have any of those cards, hit me up... seriously. Here's a link to that rather sadly written post four years ago. LINK )

This World Cup? We get Prizm. (insert Price is Right fail horn here) On the plus side, they improved Prizm from the offerings found in baseball and hockey. And the autograph checklist is fantastic, Although it's unbelievably hard to pull one.

I bought a hanger box, and then did some old fashioned swapping to get a bunch of base cards from a couple of cracked hobby boxes.

The box... nothing special, and it didn't scan well either. 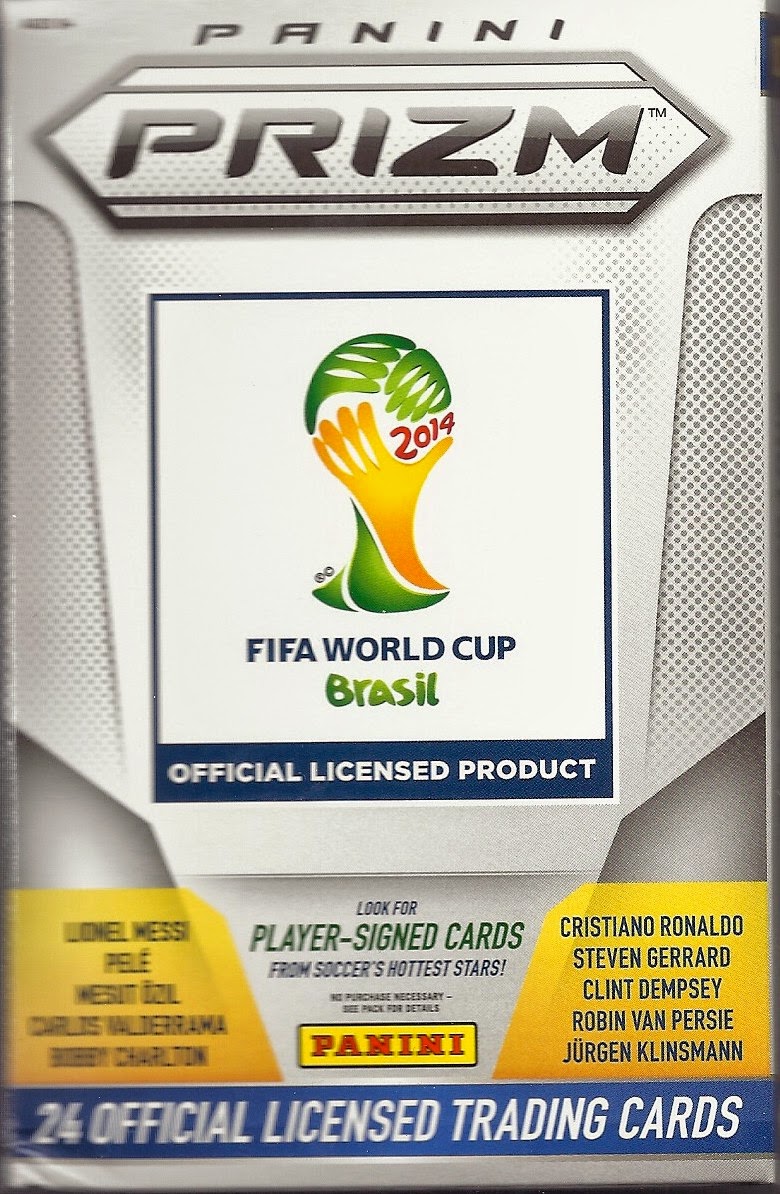 the wrapper. Did I mention you get 6 cards per pack? 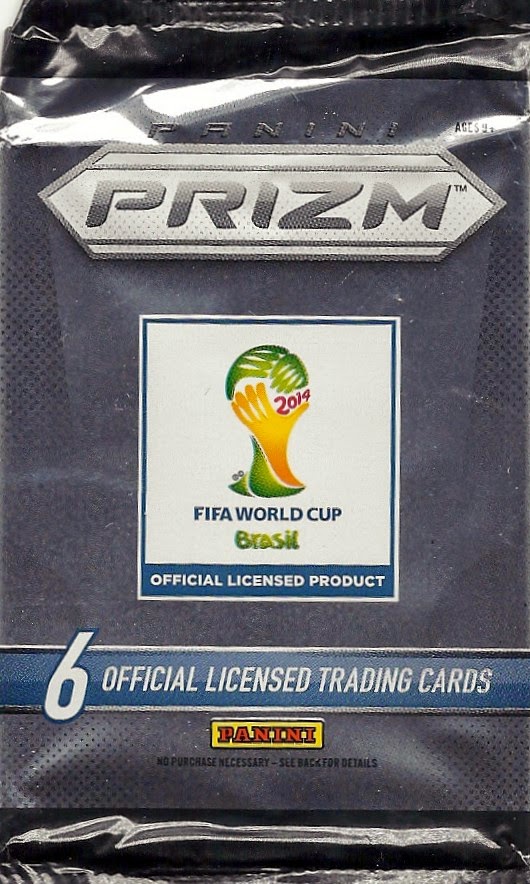 The base. I grabbed a few of the Manchester United cards I had available. You're welcome.

Javier Hernandez. you may call him Chicharito. Nani. Panini added some much need colour to Prizm, focusing on team colours. 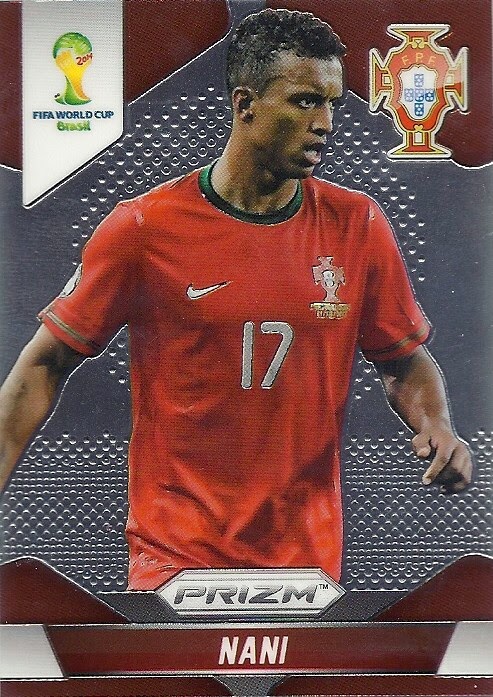 Valencia! His play faltered when Rafael got hurt. This winger needs a fast right back to play behind him. 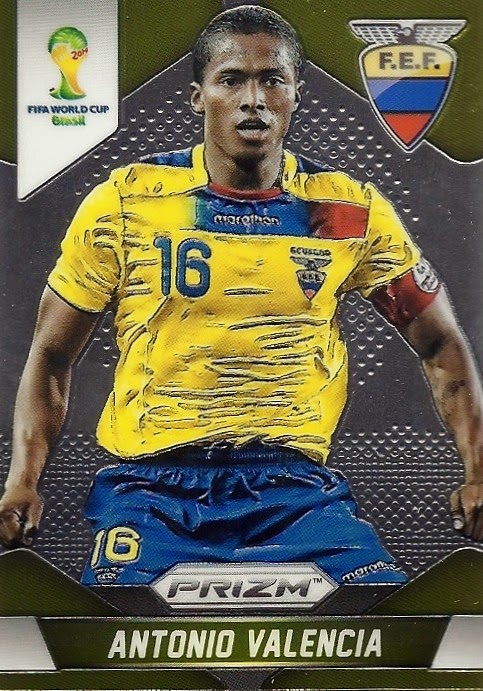 Mr Van Persie. Can the Dutch finally take it all? 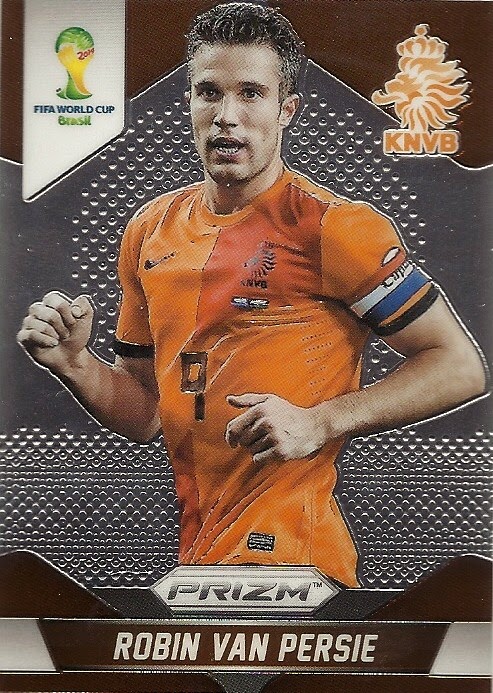 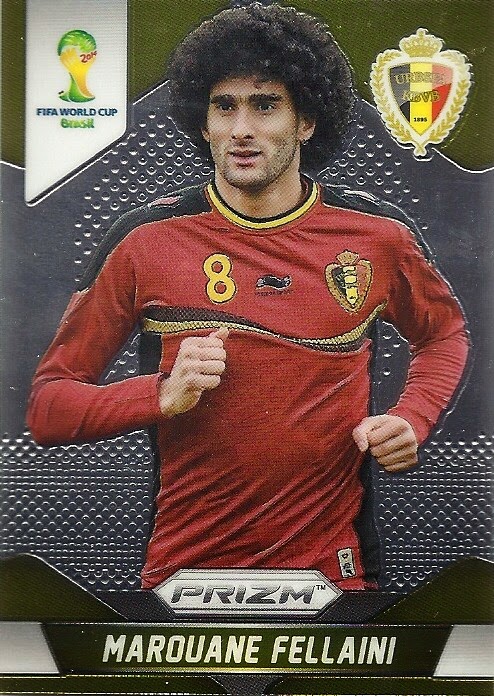 He's not a United player, but just in case Dayf is still awake. 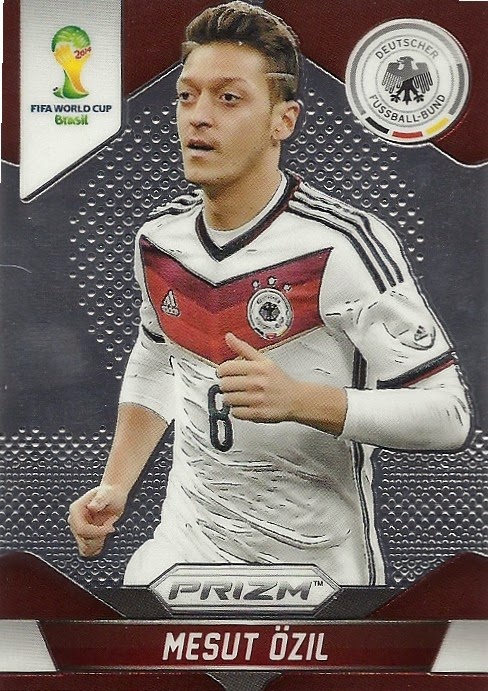 There are several insert sets included as well such as World Cup Stars. 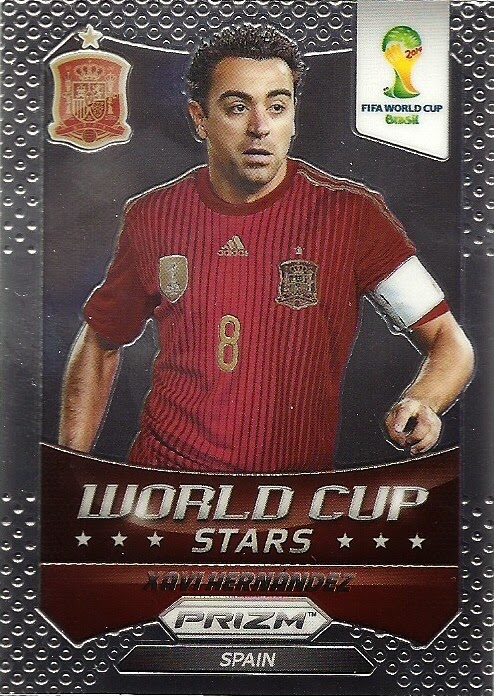 Team cards. This insert is actually a parallel of an insert. It's a refractor prizm. 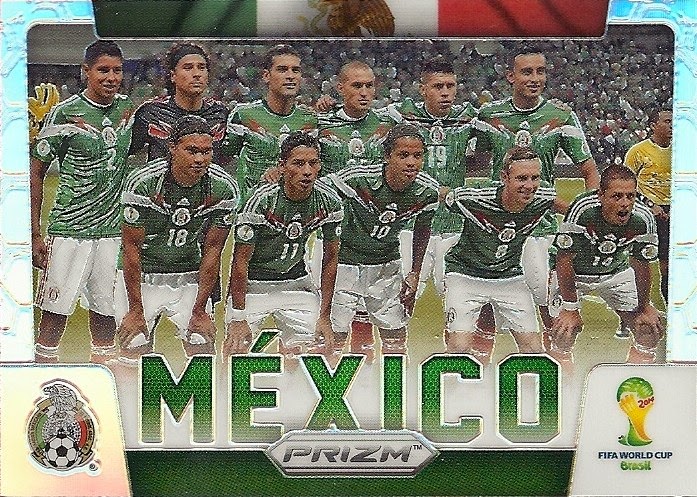 Of course there are also parallel sets to chase. In fact, every card, including inserts, have multiple parallel versions.
Here's a purple prizm 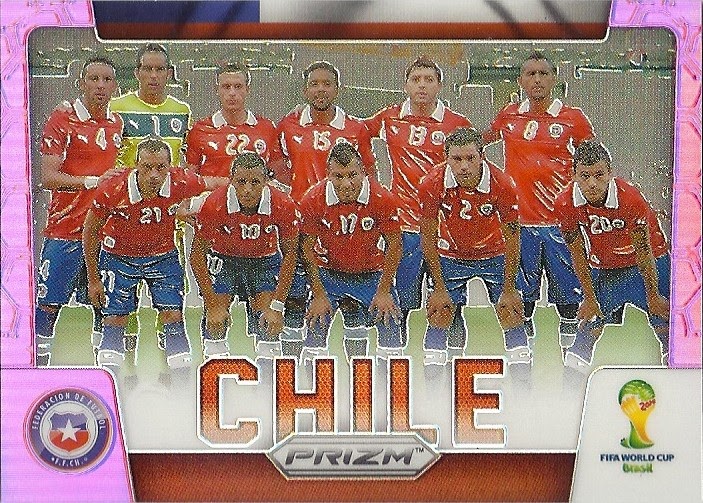 This is called a 'Red and Blue Blue Wave Prizm'. And no, I didn't stutter. 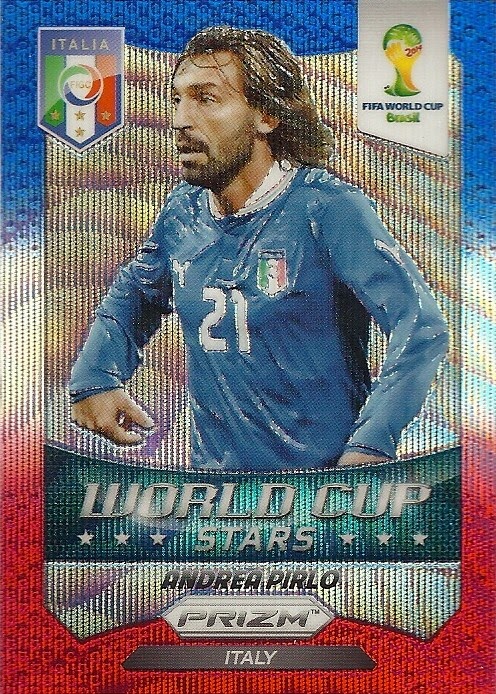 This is a Yellow and Red Pulsar Prism. 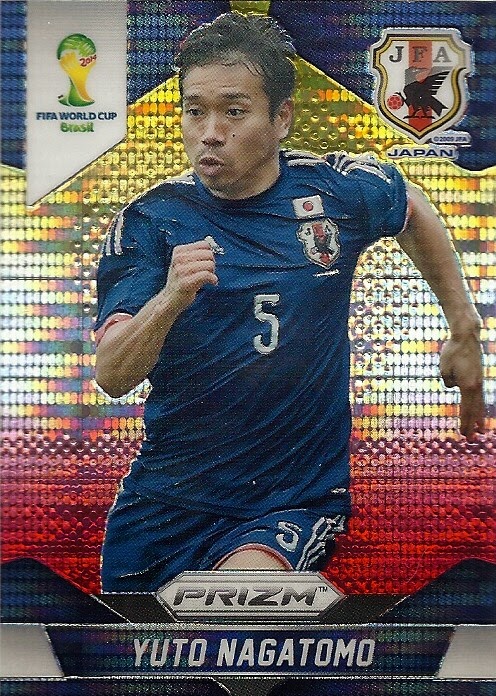 and of course the Red White and Blue Power Plaid Prizm. 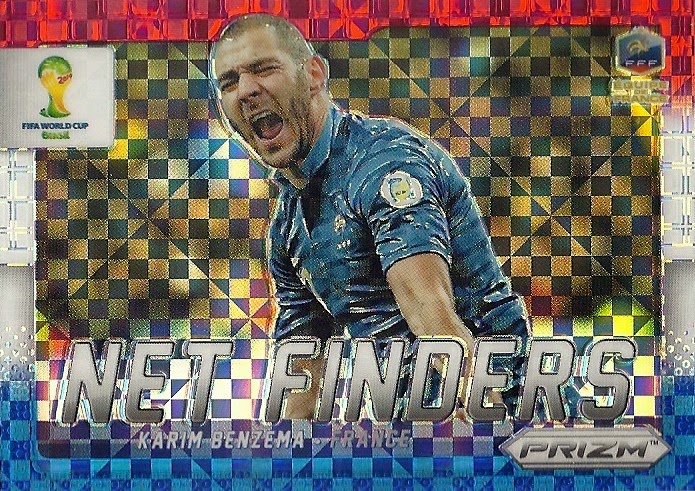 In fact, let's see if I can name all of the insert sets and the parallels. Chime in if you think I missed any.

Now... I'd say 90% of those cards also comes in all of these parallels.

The joys of random completed sets.

as one of the few remaining set collectors in existence (at least, that's how it feels around here at local trade nights and shows...) it's always a feeling of joy when I am able to add that last missing card to the binder. Filling that last empty slot in the page. I can't help but smile.
I was able to do just that for three sets recently.
a 2009 Black Ichiro Suzuki #300. This completes my 2009 Topps Black set. I don't have the regular flagship, but I do have the Black parallel complete set. Yay me. I've had this card on my Dirty Dozen most wanted there on the right hand side of the blog for about three years, but have now crossed him, and a few others off.
Come to think of it, I can cross #7 off now too.

Keep an eye out for updates soon! I know you'll all wait breathless with anticipation. UPDATED!!! 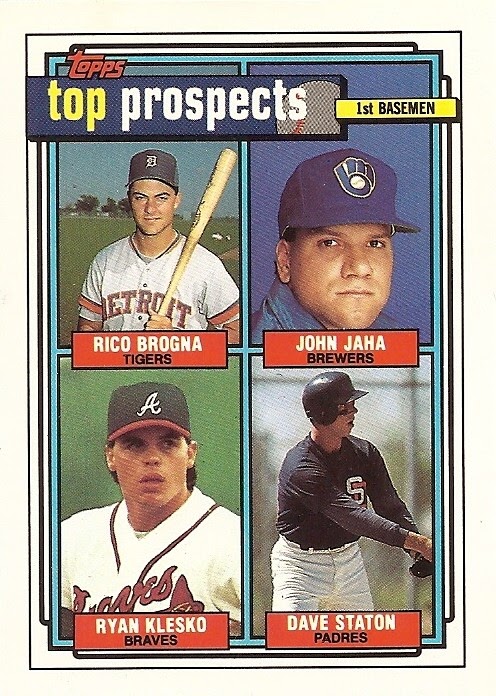 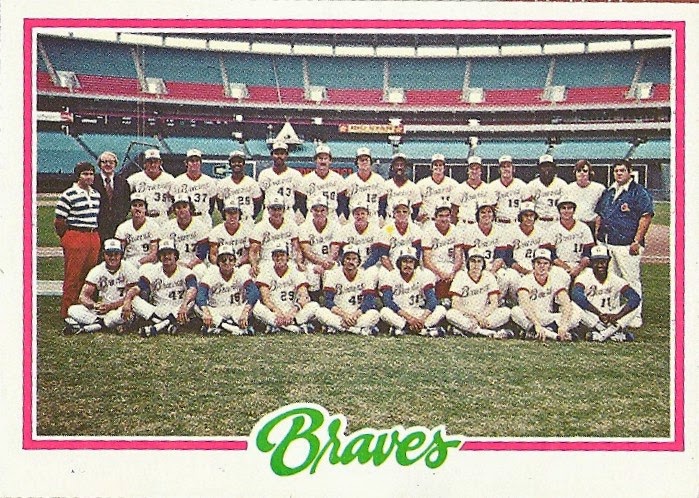 I'm surprised no one ever graded this baby. It's sharp. And now it's mine. Safe from the plastic prison from hell. Another team set complete.

Well almost a day early... it's 2 am here right now. I started this earlier, I swear!

It's everybody's favourite time of year, well, except grumpy old owl.... That's right. Not only is it playoff hockey time, it's also NFL draft time. Why they delayed it two weeks is beyond me... but it's finally time.
And like every year, I'm back with my pal Jamie to prognosticate and generally just have fun by putting out there the proof that neither of us knows what we're doing.
But it's good conversation.

Let me say this before we begin. I expect a LOT of trades this year. A lot of teams have specific needs.... needs that won't necessarily be filled by the time their pick comes.
We'll see if it's a buyer's or seller's market.

Make no mistake. Houston is trying to trade down. They want Khalil Mack. Whether anyone (Atlanta?) bites only time will tell. I think the price will be too steep, and the Texans will be forced to take Clowney.

I know Jake Matthews has a connection with Jeff Fisher, but Robinson is a lock LT for the next 10 years. A monster run blocker, he'll have to improve his pass blocking.
The Rams are also looking to trade down. I think this is where the action starts. Especially if Houston selects Mack.

Jacksonville needs so much. Mack is the best 'right now' player in the draft. And he fits the Jags scheme. No way they trade out.
Could surprise.... Johnny Manziel or Sammy Watkins

I really thought about plugging in Manziel here.... it's a good fit. But with the Browns having two first round picks, I'll take the weapon here, and give them a QB at #26

I'm giving the Raiders some credit here that they will make the smart pick and grab a tackle that will improve their line for the next decade. But if Cleveland passes on Watkins, they'll trip over themselves racing to select him.

I really think Atlanta moves up to grab either Clowney or Mack. But if they can't, let's protect Matt Ryan, shall we? And Lewan can. An instant starter.

Another team trying to move up. The GM wants Manziel. The new coach wants Aaron Donald DT. Who's going to win the power struggle?
I'll compromise and give them the wide out they desperately need.

Minnesota would like to trade down for more picks. A new coaching staff, and the re-signing of Matt Cassell moves me away from QB here and into improving their horrid pass defence. I say they trade down however. With... the Jets?

The Bills need 'backers, and there are a couple of good ones available. But it's not great value at #9. So I'm breaking Baltimore's heart and giving them Ebron.

If Detroit doesn't trade up to get Watkins, they'll go corner.

New coach Ken Whisenhunt gets his guy. Jake Locker can play this year while Bortles learns.

The G Men need help on an aging team. Barr is an instant starter on a sub par LB core.

I like Pryor. He's a violent hitter. However, if the Rams do trade down from #2 and miss out on a tackle, look for it here... one of the three or maybe Zack Martin.

If Donald is still there (Dallas may move up to grab him) the Bears will snag him and be happy.

The Steelers' line is atrocious. And Big Ben isn't getting any more mobile with age. Nabbing a starting tackle is a no brainer.

Lots of talk about Dallas trying to move up. Hopefully no. They don't need flash, they need depth. Injuries killed them last year. Take as many defencive players as you can.

If the Ravens don't move up to get Ebron, they'll take a weapon of a different kind.

I predict the Jets will move up to get Beckham. But in my draft, they won't have to.

My reach pick so far. Miami needs a tackle, and the top ones are gone, so they take the 6'7" 325lb monster out of Alabama.

Carson Palmer can't play forever. The Cardinals take their QB of the future.
Could surprise - if they think they can win now with Palmer, then look for Ryan Shazier LB or Bradley Robey CB.

The Pack suffered a lot of injuries last year that left them thin on D. Ryan steps in both on D and special teams.

I'm giving Philly the safety rumoured to be picked by the Cowboys. The Eagles need to step up on D to compensate for being on the field so much due to their no huddle speed offence.

Let's give Alex Smith another target. The walrus loves his offence.

The Bengals continue to build their impressive defence.
Now if only they spent some time on their offence.

Drew Brees spent waaaay too much time running around last season. Time to build him a wall.

Anyone who thinks the Panthers aren't drafting a receiver here needs to look at their roster. That kid from Play 60 who's loosening up his arm is now their top WR.

I say Bill needs a TE so he'll reach and get one here. Both Hernandez (in prison) and Gronkowski (made of glass) aren't reliable.
Who are we kidding? The Pats will trade down into the second round for someone's first next year, and then they'll pick a TE.

The Niners don't need a lot. And what they do need isn't available at #30.

The Broncs are still reeling from the Super Bowl. While O-line is a need, a revamped defence is a must.

The Seahawks don't need much help on D, (except maybe during all of their drug suspensions) so Russell Wilson gets a new toy.

There you have it, for all it's worth. (don't forget to subtract tax)
Hope everyone has a good draft party to go to... eat lots, stay safe, and Go Cowboys!

Posted by Captain Canuck at 5:00 AM 2 comments: