I love using Zistle for trading. I don't use it nearly enough. However, I've been able to add a few friends where it becomes a routine trade every six weeks or so. Especially if we can keep it to under a dozen cards and go the ever popular PWE route.
A dozen new cards for me for just an 0.85 cent stamp? Yes please.

One of these frequent swappers is buckstorecards who of course writes Sportscards from the Dollar Store. We both like the shallow end of the pool collecting wise, so when the opportunity strikes to swap base cards with someone who likes them as much as I do, it's a no brainer.

We fashioned a swap on Zistle, and off the packages went. Or that was the plan anyways.... I got a notice from him saying that he was not only sending our trade, but also adding a Toronto Blue Jays team set from 2016 Gypsy Queen.

He had entered a case break and came away with an extra base set or two. I casually remarked I'd love to swap for one....

then I promptly forgot about it. Um... yeah.

But he didn't, and they arrived here safe and sound.

It left me scrambling to find a surprise or two to throw in for him.... I hope he likes what I sent.

I still love the generosity of the people we meet in this hobby. Thanks J.D.!
Posted by Captain Canuck at 9:22 PM No comments:

so the immortal jim (aka gcrl ) is back. most of you probably knew that, but I've never been one for breaking news....

check out his new blog, frankendodger here -----> LINK  to see if this card made his list. 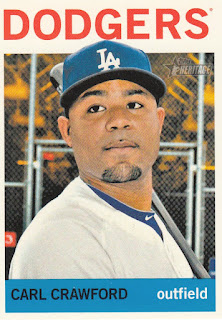 you may be wondering why I chose mr crawford here. well, he was the only dodger card sitting on my desk so I didn't have to get up and go look for one.

yeah, we don't overthink things too much around here.

welcome back pal.
Posted by Captain Canuck at 10:16 PM 1 comment: