Card of the Year. End of Discussion.

It's getting near the end of the year, and before the Christmas hurricane I wanted to do one of those fun little polls for 'Card of the Year'. You know, like those neat ones Night Owl does. Post a bunch of cool pics, have a poll in the sidebar, everyone votes, discussions and hilarity ensues.
Until today. I found the card of the year. There will be no polls, no discussion. The trophy has already been engraved.
I give you.... 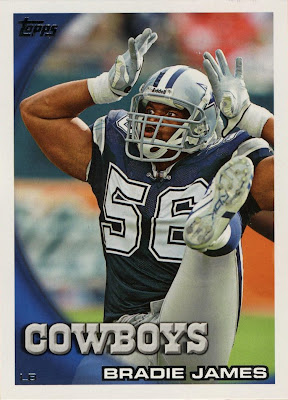 This card is Chuck Norris in a ninja suit with an eyepatch. It's that good.


Oh, and if you're reading this Leesh, Happy Birthday. Call me, it's been too long since we talked.
Posted by Captain Canuck at 8:14 PM 5 comments:

Somebody wanted this card.... 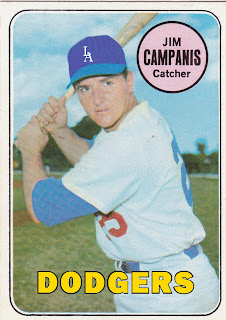 One of my Dodger buddies was lamenting the other day about this card not being issued. Either Night Owl or GCRL, I can't remember which now.....

I need a little help. I know for a lot of you, that isn't news. But in this instance, it's with a card checklist. 2010 Topps Chrome Football to be precise. In one of the recent group breaks, I got this card of DeMarcus Ware. 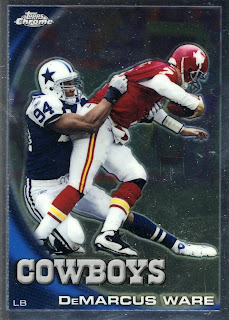 Now with all chrome football cards, the number is in the top right corner and begins with a 'C', as demonstrated by my good friend Tony here. In this case, 'C20'. 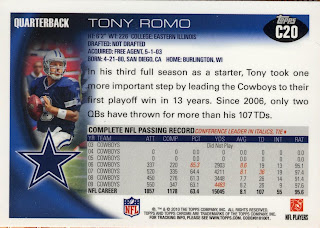 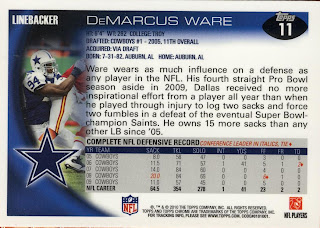 But according to every online checklist I can find, DeMarcus is listed as card C123 and Golden Tate is card C11. The Topps website is a waste of time.... does anyone have any cards like this? Does anyone have GoldenTate or DeMarcus Ware and can check the backs?
Any help would be appreciated.
Also, please check the sidebar to the right as I have finally added my 'Most Wanted' card list. This won;t list a '54 topps Aaron or anything, but cards you may have lying around in boxes or in forgotten piles in the spare room. Thanks for looking.
Posted by Captain Canuck at 8:04 PM 5 comments:

A wee while ago, Colbey, aka Flywheels commented on wanting a card I had posted. I said sure, no problem. I put it, aand whatever else I could find laying around in the numerous piles I have going on into an envelope and sent it off.
As usual, he did the same and then some. Among the huge stack of cards he sent, I pulled a couple of my baseball faves to share here. I say baseball faves because the swap initiated with football, and he sent some football cards as well, which I'll share later on....
Chipper! I got 4 or 5 Chippers I didn't already have, including this one. I really like this set and hope to finish it one day. 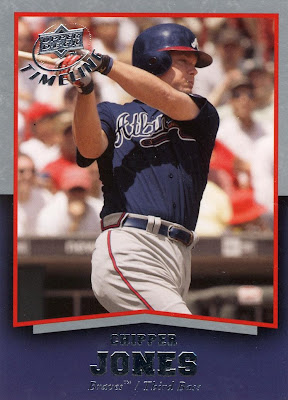 A game used Jeffrey. I think he'll end up in Kansas City this year after hitting over .300 for Texas last season. 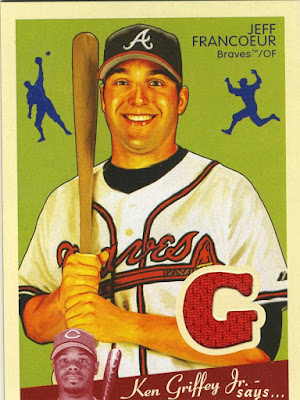 A BMac Turkey Red. I have no idea if this is from the Turkey Red set, or one of the eleventeen Turkey Red insert sets they did. Could Topps publish a worse website? 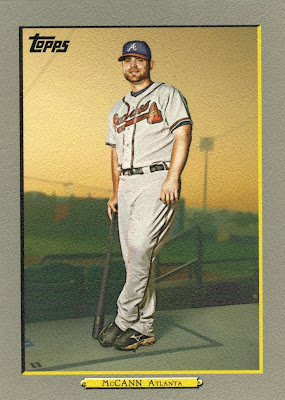 And a few shiny Topps Chrome to tell me once again it's time to clean my scanner. Tommy, which I had already, but dupes are welcome... 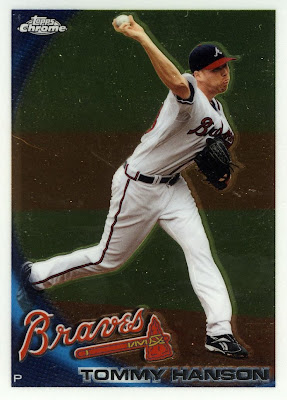 and Chipper! Which I didn't have until now..... 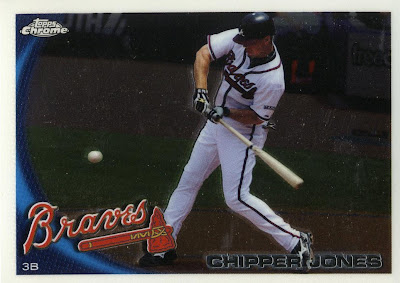 the addition of Mr Jones means I now only need #174 Jason Heyward to complete my 2010 team set.

Thanks Colbey!
Posted by Captain Canuck at 9:33 PM 3 comments:

You all remember the World Cup. I still miss it. Most of you probably don't. But it's still not quite over. Not until I finish that damn Panini 2010 FIFA World Cup Sticker Book. I will finish it. I promise. I'm a little bit closer now due to a trade arriving in the mail a few days back. From Serbia. 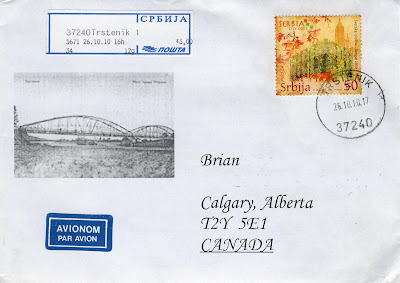 Yes. Serbia. I'm going to the ends of the Earth to finish this damn book before the end of 2010. Nice of them to stop the war long enough to swap stickers.
Some of the stickers that came trans-Atlantic were Brasil, 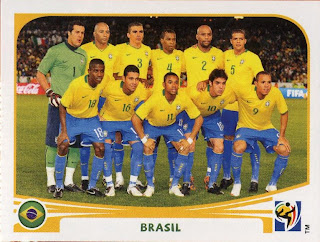 one of the greats to ever play the game, now sadly past his prime, Ronaldinho.. 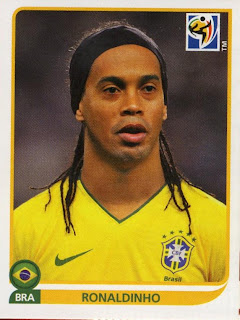 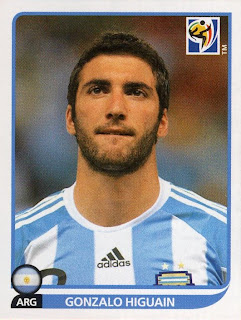 and German keeper Rene Adler. I post Mr Adler for the oddity that in the 2010 World Cup, Germany played two keepers. Panini oddly put two keepers in the German team set, when most countries only got one. 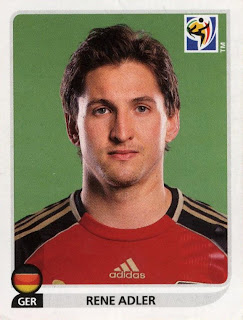 Now with the help of my LCS (four stickers) and after a trade arrives from a fellow blogger, giving me two more stickers towards my goal, I will be down to needing TWO stickers to complete this set.

Somebody, anybody, please help.
Posted by Captain Canuck at 3:28 PM 4 comments:

A little while ago, 1st and Goal had a couple of group breaks going on. You may have seen the pimping here on Waxaholic. Or maybe you didn't. Either way, I was in all the way. I entered the 2010 Topps Chrome football break. Leaving the Sweet Spot for others....
$7.50 got me a seat at the table and my pick of two teams. I took the Cowboys (duh...) and the Lions. Yes, the Lions.
Let's see what I got.....
Tony, pre-broken clavacle. 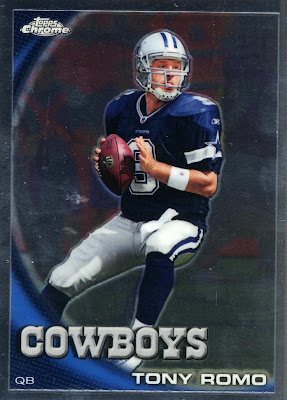 Jason Witten from a game against the Dallas Texans. (Kansas City in their old AFL throwbacks) 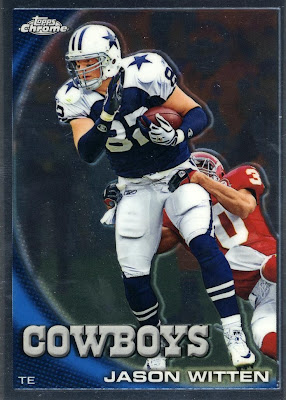 DeMarcus Ware doing what he does.... sacking the QB. In this case, a Dallas Texan. I guess they liked that game. 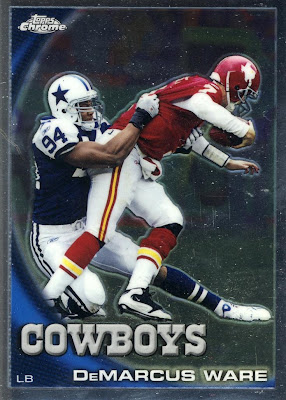 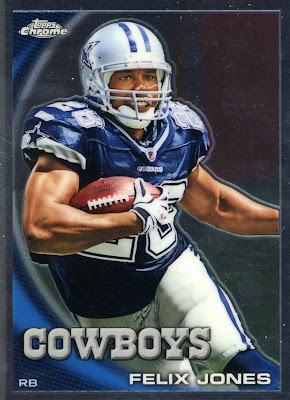 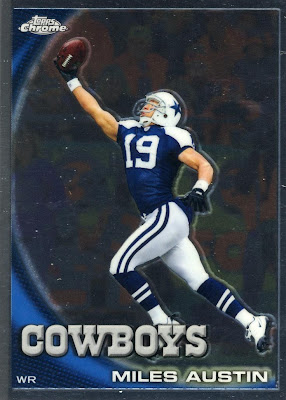 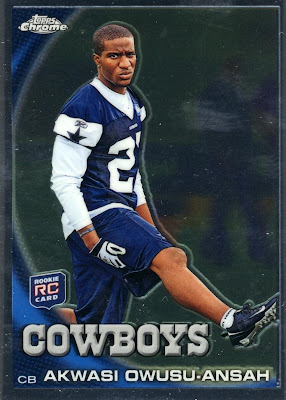 No fun inserts in the Cowboys section... let's hope for Detroit! 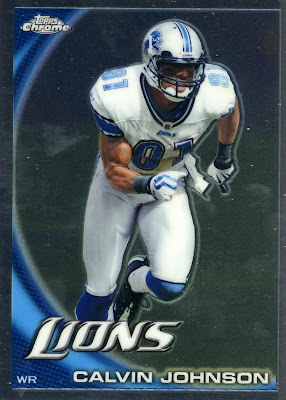 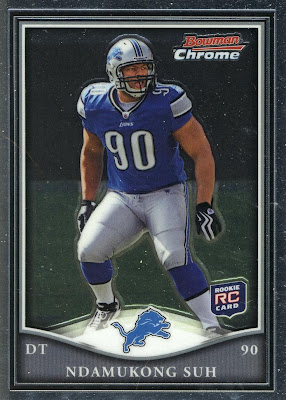 Jahvid Best on a Gridiron Lineage card with Fumbleayah Peterson. 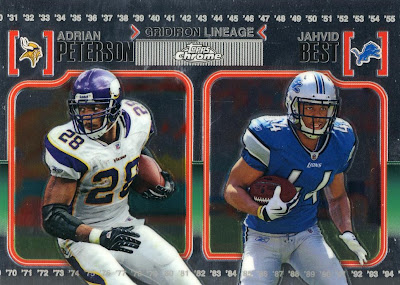 and a Red Ink Auto of Ndamukong Suh!!! 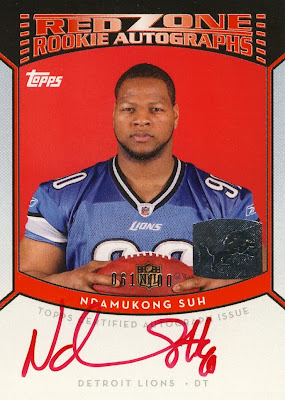 so in the past couple of days, I've either traded with or been approached by some fresh faces in the ole blogosphere...


so please put your hands together and click on the following links of 4, count 'em, 4 new blogs.

Check 'em out, and tell 'em Canuck sent you.
Posted by Captain Canuck at 2:34 PM 3 comments:

to all who serve / served, Thank you.  Please watch the video until the end...

The American Gold Glove winners were announced today.... and let's just say that apparently a blind man used a dart board to pick some of the winners as Derek Jeter............

wait. I made someone a promise. Dangit. I can't say anything more for at least 36 hours..... ARGH!
Posted by Captain Canuck at 4:35 PM No comments:

Yes, I'm still working on my World Cup sticker book as well as the last two season's worth of the Premier League. John from Pursuit of Red Sox sent over a package about a month ago (I'm sooo behind in my posting) that contained stickers from all three sets. 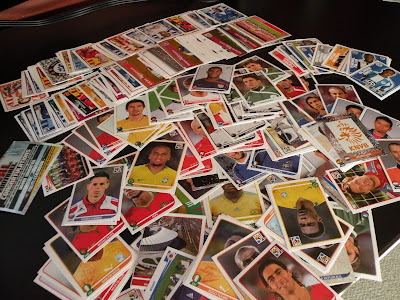 And if anyone else is collecting these, my wantlists are up to date... please take a look at them, link on the side bar.
Thanks.
Posted by Captain Canuck at 11:15 AM No comments:

Our great friend, the Wicked One himself has decided to jump into the group break thing.

But if you know Wicked, you know it just won't be the normal variety. No. That wouldn't do.

Instead, he's got going the most unbelievably awesome group break going known to man or woman.

Go HERE, and sign up for The Awesome. Yeah. That's right. The Awesome. Capitalized.
Posted by Captain Canuck at 10:43 AM No comments:

First off, I hope everyone had a safe and happy hallowe'en. I see that most of Detroit is still standing, so that's nice.
Apparently the Giants won more than the pennant. Proving the theory that if no one watches, will there still be a winner. Speaking of Canada of course. Or am I? Apparently regular season football games drew a bigger audience than the World Series. Interesting. I wonder if Bud Selig even noticed.
But enough of that. On with bigger and better things. Like a contest!!!!! Relax. It's too late for you. I already won it.
Justin from The Hopeful Chase held a contest awhile back. Go HERE for the link. He showed a picture, and it was up to us to come up with a caption.
Well wouldn't you know, I won. Sweet. What did I get? First, I got an on card hand signed in person auto of none other than Steven Stamkos. Effin sweet. 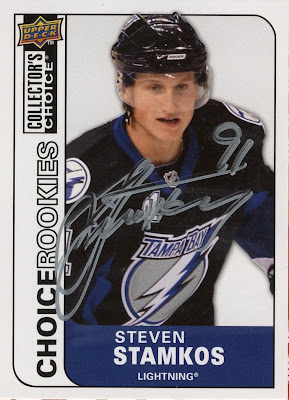 Next, he really threw me for a loop. He sent a Joey Chestnut auto. Now I must confess that although I had heard the name before, I had no idea who he was. 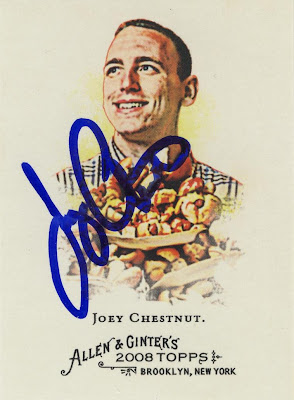 Everyone needs a hobby I guess.