The kind, patient folks at Zinio asked me awhile back if I would post about their product to all the wonderful people that hang out around here.

I'm finally getting around to it. It never rains, but it pours, right? It's been one of those months.

Zinio is the world's largest electronic newstand. Thousands of top magazines from all over the world. All on your computer or mobile device.
Pretty sweet.

Now I was always a guy who liked to hold the magazine while reading it. But over time, I switched. Especially with the new phones and tablets... there's no reason anymore to be lugging around a magazine or newspaper.
Not to mention the whole environmentally friendly issue. If we cut out just 10% of our newspaper or magazine production... imagine the trees we could save.

Some other goodies... with Zinio you can browse or buy single issues or subscriptions from wherever you are, whenever you like. Instantly. And using the Explore feature, you can read articles, even without a subscription, and share them with your friends.

Not something I would do, but a cool feature nonetheless.

Want to try a magazine before committing to a year long subscription? Try the new Z Pass. For $5 a month, you have a subcription to three magazines a month. Next month, keep the same three or swap them out for new titles. Now that I might use... I can never make up my mind.

Zinio also has specials all of the time. Every month something different is featured. So keep checking back on their site and you might find something you like on sale!


Now for those of you who have sat through my little spiel... I have a reward for you. Zinio has offered up some free subscriptions for my readers. (one less than originally planned as I'm going to keep one for myself)

So we're having a little contest. Well, two contests actually, but one is now over. After the results for the 2012-13 Premier League Contest are posted, I will have three subscriptions left to giveaway.

If you would like a FREE subscription to one of the thousands Zinio offers, all you have to do is go to www.zinio.com and browse through the titles.

Then, leave me a comment here on this post saying you would like one and mention two of the possible titles you may choose. You do NOT have to mention the one you would actually want... that's to decide later IF you win!

You must also leave me your email addy in your comment. This will be the addy I use to contact you should you win. Leave it in the form of myemailaddy AT theinternet DOT com so the spam bots don't get you.

Start shopping and good luck!
Posted by Captain Canuck at 10:18 AM 5 comments:

Welcome to the last (probably) weekend of matches. Match 38. To me, that was one quick season.
Many highlights, some lowlights, but a great season all round. 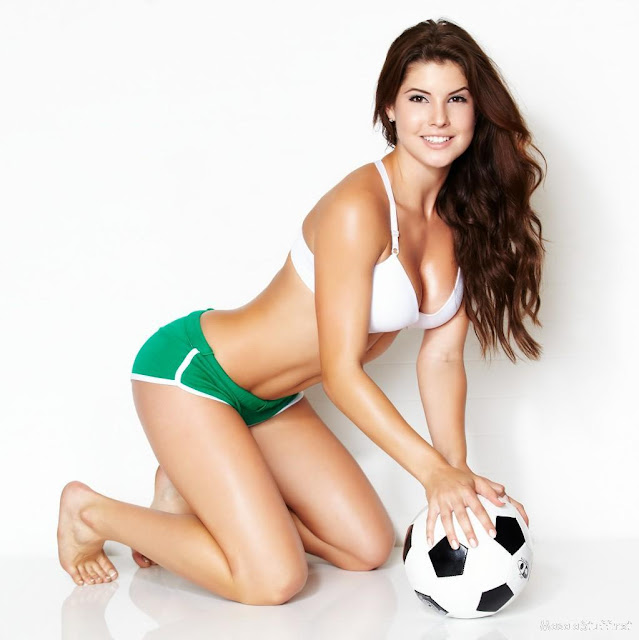 Not a lot to play for this weekend. Only one lone spot battle for Champion's League play.

Let's look at the table.


The battle is between Arsenal and Tottenham. There can be only one. heh... Mathematically, Chelsea could be the one to miss out, but they would have to lose to Everton, while Arsenal wins AND Tottenham beats Sunderland by 17 goals.

I wonder what Vegas is giving on those odds. Even IF you won that bet, you'd never collect. Vincent Savino would have you buried under a cactus somewhere near Area 51.

So the eyes will be on Arsenal/Newcastle and Tottenham/Sunderland.  My bet is that both clubs win and the Spurs just miss out yet again.

In other matches, Sir Alex watches over his last game as Manchester United vist The Hawthorns to play West Bromwich Albion.
Elsewhere we say goodbye to Wigan, Reading, and Queen's Park Rangers.
Next season will see new participants Cardiff City, Hull City, and the winner of the Crystal Palace vs Watford match on the 25th.

All matches are on Sunday, so please post your final results on/by Monday evening.

OH! I almost forgot. There could be a tie for the final Champion's League position. Should Chelsea draw with Everton, AND Arsenal win by exactly 2 goals, Chelsea and Arsenal will have to play a playoff game to decide the position sometime this coming week at neutral ground. (Villa Park has been chosen)

Example, if Chelsea and Everton draw 1-1, and Arsenal beats Sunderland 3-1, then we will have a tie because the only tie breaker used is goal differential.
Not likely, but still possible.
Posted by Captain Canuck at 12:00 PM 3 comments:

at the April trade night, the owner of the shop called me over and handed me this. 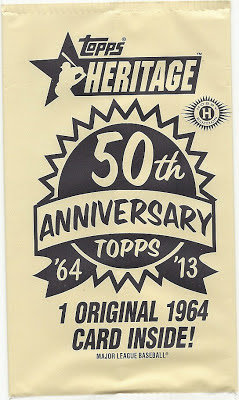 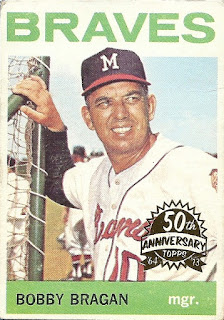 A very beat up Bobby Bragan. Card #506
This baby is warped, has a few creases, and has no idea what the word 'corner' means. It's almost oval.

I happen to need this card for my Braves team set. So it will fit nicely in my binder until a replacement without that gold shield comes along.

Either way, it's ALWAYS a good day to add a '64 Brave to the old collection.
Thanks Darren!
Posted by Captain Canuck at 10:29 AM 1 comment:

We be awarding the trophy this weekend. Well, not on this contest, that seems to be going down to the wire.
But in the Premier League, Machester United is playing their last home game of the season, so the trophy, medals, etc, will be awarded on the pitch after their game with Swansea. There will also be a tribute to retiring manager, Sir Alex Ferguson.

I know it's the World Cup.... I'm on a deadline here and couldn't find a good one of the league trophy. 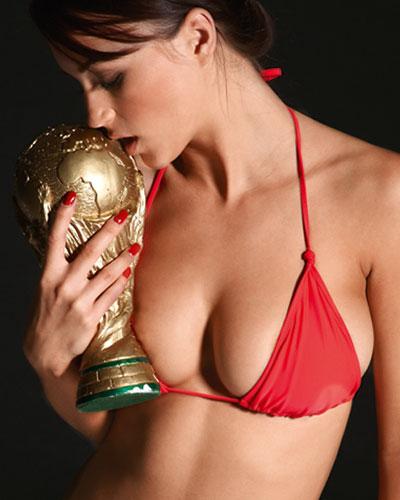 I'm sure you'll forgive me. Most of you probably wouldn't have noticed. Trophy? What trophy?Where?

Let's check the table and see how the qualifications for Champions League is going, as well as Wigan trying to avoid the drop.


City in purple is confirmed for Champions League.
Light blue is the fight. Three clubs for two spots. However all these clubs are locked in for Europa League.
Dark blue, well, there's always next season.
Yellow, don't relax, one slip and it's the drop for you.
Red, forget it, you're dead.

Games are Saturday, Sunday, and Tuesday. So please post your comment by Wednesday lunch at the latest.

Go United!
Posted by Captain Canuck at 5:00 AM 5 comments:

We've got some great matchups this weekend. So let's take a peek. 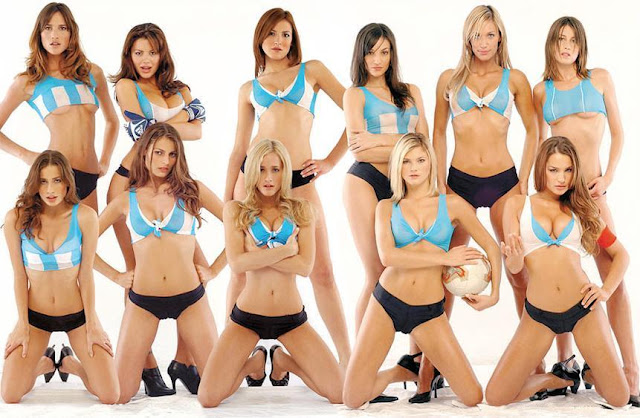 Many different colours on our table today....

Green - we know for sure United has won the Championship.
Light blue - teams battling for Champions League play next season. Only the top four clubs qualify.
Blue - clubs with nothing left to play for but pride
Yellow - Danger zone of getting dropped. But any type of result should see them through.
Orange - Chances are, one of these clubs will be relegated.
Red - it's too late. Turn out the lights. The party's over. Oprah is singing.


we have some cool matchups this weekend, including Norwich and Aston Villa in a battle to avoid the drop. I think Villa will upset the Canaries.

Matches are throughout the weekend, so please post by Tuesday afternoon.

Today's post is brought to you by.... the colour purple. And the number 9.
For there are 9 different purple cards I want to show you. Everything made sense when you were a kid. I'm not sure what happens to change all that or why.

Here, we like it simple. Some might call me simple. I've been called worse. But I digress.

I came across an online seller who had a card I wanted. Before buying it, I looked to see what else he had. This is why this post has 9 cards, and not 1.

I, like a lot of you, have a weakness for Topps Chrome coloured parallels. Orange may be my favourite. But if you've been paying attention, you'll know that today, we're talking purple. 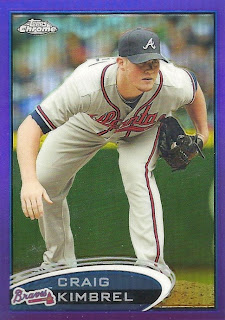 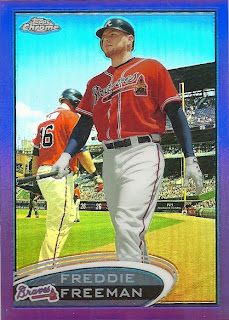 Tommy Hanson. I miss Tommy. I wonder how's he doing on the left coast? A quick check shows he's leading the Angels in wins and ERA (for starters). Good for you Tommy! 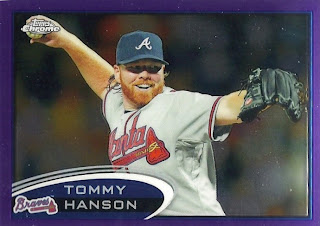 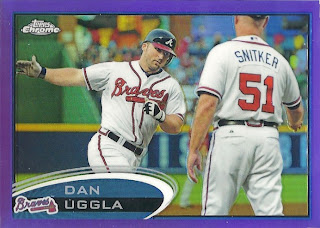 The entire Braves team. It should be Michael Bourn. Find Jason Heyward.... then look down. 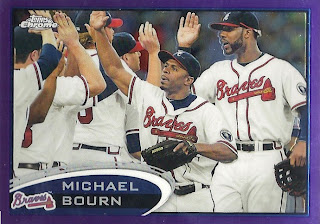 Brandon Beachy. I hope he's back soon.... think how good the first place Braves would be with him back pitching. Woot! 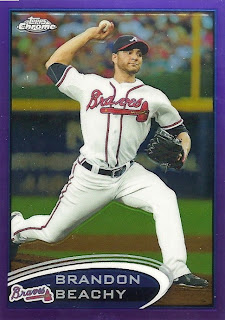 Andrelton Simmons. He threw some guy out at first from the outfield grass while sitting on his butt last night. Awesome. 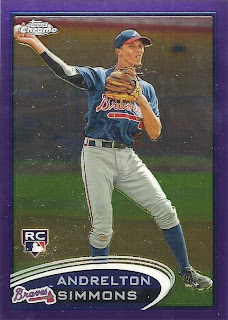 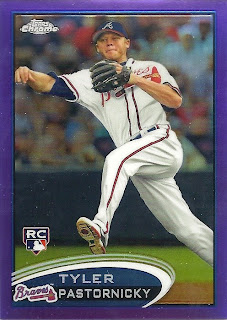 and the card that started all of this, my old pal and fave, Adam LaRoche. 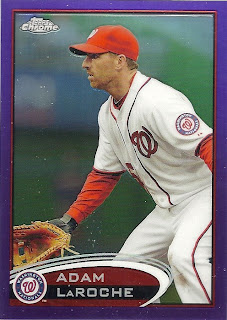