say the year 1956 to me and a lot of images go flowing through my head. It was a very influential year on my life. No, I'm not that old, I wouldn't make an appearance for almost another two decades. But 1956 still influenced who I am.
Mainly because of this.  LINK <--- clicky--="" clicky="">
I lost a lot of family in those two weeks. A lot of branches cut permanently off of the family tree.
One of my passions is cars. Yeah, I'm a car guy. Or rather more accurately a former car guy. Not much money left in the budget right now, or even the space to do it either. But it's still there, lurking under the surface.
And what car guy doesn't think of this when hearing 1956? 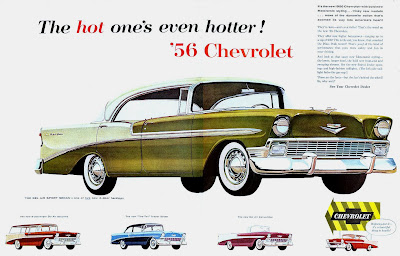 (I realize some of our female readers may be more inclined to remember the T-Bird or Baby Birds, and that's cool too.)
That's such a cool pic... if I ever need another hobby, it would be vintage card advertising. There's some really great stuff out there.
But for most of you reading here today, 1956 simply means this..... 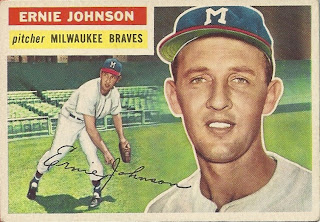 some really great baseball cards. No fancy cars, no massacre or politics, just the unpretentiousness of beautiful cardboard.
I picked up these two at that card show I was rambling about in my last post.... the seller had a very big pile of these on his table. Including all of the Braves except for Aaron and Spahn.
For all of the Braves there were four marked at $30 or more... the rest he said were $10 each.
Now that's a bit steep. These can be had for under $5 most places.... but here in Calgary, the opportunity to shuffle through a stack of these, choose a couple, and purchase them, here, in person, was too much. So I bought two.
You've already seen Ernie there above. Ernie is a must have for any Braves fan. What a great man.
The second card was a bit tougher choice for me... so many to choose from, none of them wrong. But I finally went with Andy. Andy is smiling at me. And maybe the play at the plate in honour of my North Texas friend came in subconsciously too. 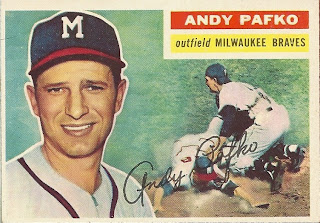 Other than being off center, the Pafko is amazing. Sharp corners, great colour, gloss intact. Amazing.

Both are dark backs if you're into that type of thing...

So while I always think of other things when talking about 1956, for today, it was just about baseball cards. And my two new friends. Who after 57 years have finally found their permanent home. Their journey is over.

not sure if you heard all of the cool kids talking about it or not, but there was a card show here in Calgary this weekend. A big one. Well.... a big one for Calgary. It was quite small actually, but we take what we can get here.
There was one seller, whom I'm pretty sure we will never see again here, had some vintage baseball.
I know!
So I bought three cards. I'll show the first off here. It's a little bit older than what I normally feature on here, but just to keep the kids interested, I'll tell you it's a ROOKIE CARD!!!!! MOJO SICKZ!!!
*ahem*
Here is my very first Play Ball card. It's from the 1940 set. Meet Johnny Cooney. 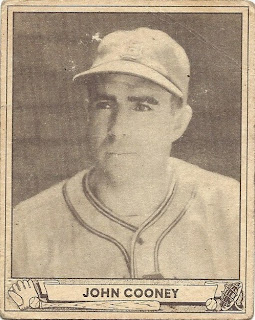 Johnny was what we'll call a defensive specialist. In a 20+ year career, he hit over .300 six times, finishing with a career average of .286. And a whopping 2 home runs.
In 20 years.
He actually held (maybe still does) a record of most games played before hitting his first home run. His rookie year was in 1921 and a mere 18 years later*, in 1939 he hit his first home run.

Then the very next afternoon he hit his 2nd (and last) home run. Talk about a streak hitter. 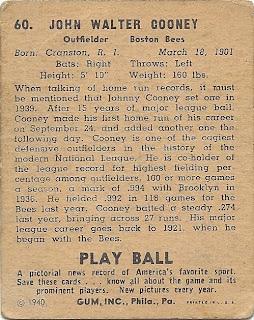 Johnny was on a table of one of those sellers that puts high sticker prices on and then puts up a sign exclaiming 50% OFF!!!!!!

Whatever. For $5 he came home with me. A lot like a girl I knew in college. *BOOM*

Why in the hell didn't anyone tell me??? My new player collection begins...

The new 2013 Bowman Chrome Draft Picks, Prospects, Rookies, and Unknown Teenagers Wearing Baseball Uniforms came out last Wednesday.
Not including parallels or low numbered inserts, the Braves have 16 cards to chase. Seems doable.
While perusing said checklist, my eyes keyed in on one particular Bravos prospect. An 18 year old right handed pitcher drafted in the 7th round out of Somerset, Pennsylvania.
Meet Ian Stiffler. 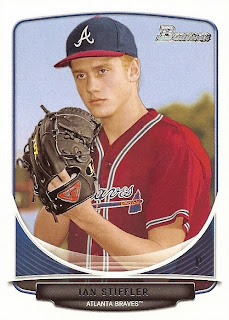 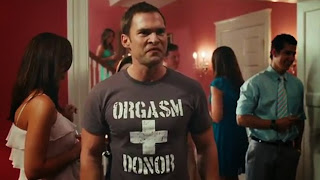 I can't make this stuff up. How effing sweet is that?

So I will be all in on this prospect... How can I not be? Stiffler? Are you kidding me?

So let's check in on his card checklist as I know it*.
*(that means it's far from comprehensive, if anyone can add to it or correct it, please do)

Oh, and you know there will be an auto request in the mail for an auto from his Mom.... 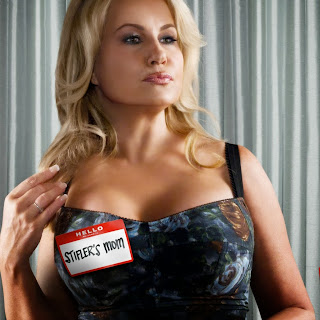 Will someone, anyone, please explain the MVP voting?

So by now all of you have heard that the awards for baseball have been handed out. All pretty much explanatory save for one huge surprise.
N.L. MVP 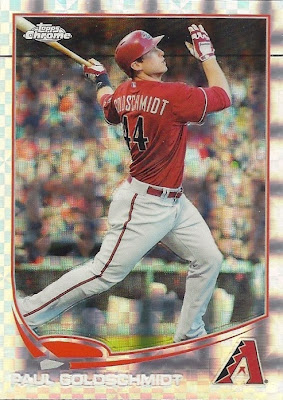 Before the voting was announced, all of the pundits, ESPN, FOX, TSN, MLB.com etc all predicted Goldschmidt in a runaway. No one was close.

And then voters voted. Perhaps these are the same people doing the HOF voting? Maybe they were busy buying porkbellies and didn't watch any actual baseball this year?
Did Selig open the MVP voting up to the fans like the *snicker* All Star game?

Maybe everyone was wrong.... maybe everyone was mistaken and the select dozen people knew something we didn't.... so let's delve into the stats and see.... I don't pretend to know much, so let's list off some FACTS.

I'm not even going to begin to try and figure out what they are, but the next time Brad Pitt and I have a pop together, we'll get into it, I promise you.

How about the glove? Is Goldschmidt that bad with the leather? No. He led the National league in put outs at his position and was second in fielding percentage. (Second by .001%. That's pretty close if you ask me)

Hmmm... well how about when was he productive? When the game was on the line? Or not?

Paul Goldschmidt did that after the 7th inning. Imagine if we counted the first 6 innings? Wait. Shouldn't we?

And Pittsburgh being a playoff team has NOTHING to do with this. If anything, it favours Goldschmidt. Imagine what he could've done on a better team?

Paul Goldschmidt got robbed. This wasn't even a close contest.
Posted by Captain Canuck at 11:06 AM 4 comments:

with Braves ownership cutting corners and getting cheaper by the day, the best reliever in baseball contemplates adding a second job. 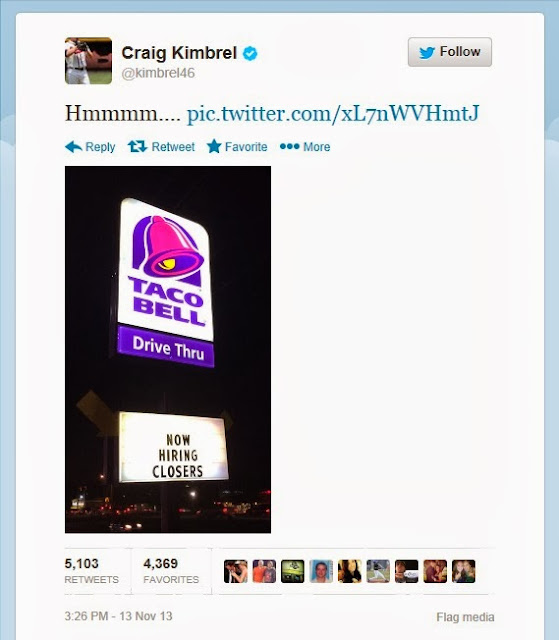