I've been the recipient of a few gifts recently. Time to start showing off some of them.

Fellow blogger bamlinden recently opened up a box of 2013 Panini Cooperstown while at trade night at one of the local shops.
He pulled some sweet cards, and saved the box topper for last. Peeling back the silver foil revealed... 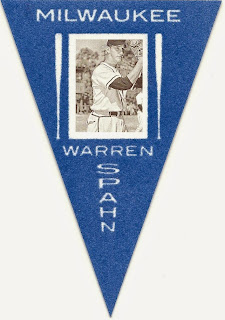 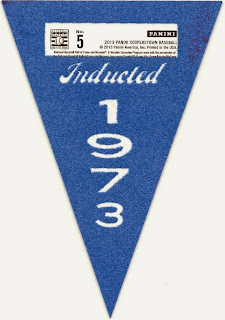 a Warren Spahn HOF pennant. It's about 3 1/2" x 5" made from blue felt. It's now mine. Thanks Brett!
Although I have no idea how to store it, or display it.

Speaking of the local shops, I went around to them earlier in the year looking for Panini's 2013 Golden Age baseball release.
None of them had brought any in.
I guess I'm not surprised.... Panini anything doesn't really sell well around here.
Fast forward to the recently, and Fuji held a contest on his blog. Somehow I ended up being one of the winners and received these six cards as my prize. 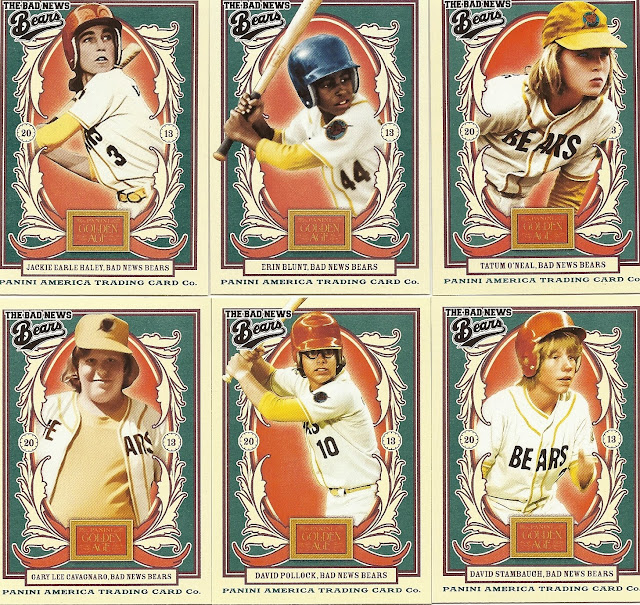 Really, those are pretty much the only cards I wanted from Golden Age, so everything worked out in the end. Thanks Fuji.

I also just received a small box from gcrl. The box was small, but it weighed about 15 pounds. In it was stacks of junk era hockey cards that I've just started sorting through... and a few Braves just because.
Among the outnumbered baseball cards was a smiling Dale Murphy insert. Dale is reacting to someone telling him that idiot voters will keep a two time MVP out of the Hall of Fame. 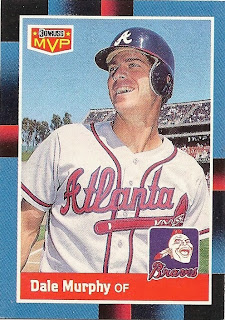 There was some new modern shiny! 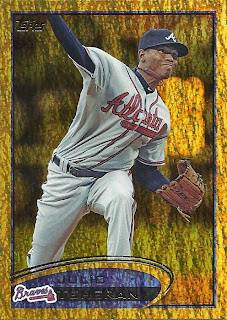 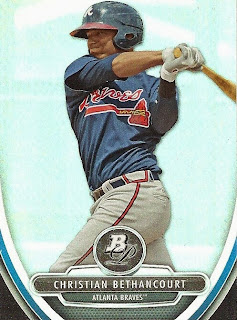 And you can`t just have shiny without balancing it with vintage.

First a sweet `59 Frank Torre. I already have one in my team set, but this one will replace it. This card is sharp! Amazing condition. If I were a lesser collector, this one would go to grading. 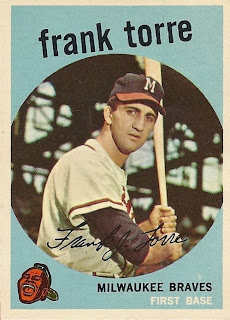 And another awesome vintage card, from the 1974 Topps set. Hank Aaron is on cards #1-6. 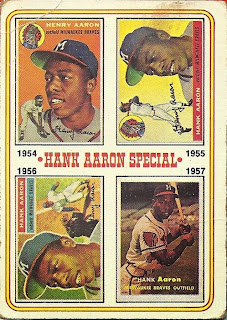 So for those of you that know me well, you know I rarely pay attention. It's not that I don't care, it's, well, that I don't care.
Products are coming out at a feverish pace, and I can't keep up.
I guess it doesn't matter too much being a set collector. I'll get there when I get there. But for the player collectors out there.... you guys are insane. Scouring the interwebs for checklists months before the product hits the street, knowing that you have to find 17 cards of your player before the product is 24 hours old because another product with 13 cards of your guy hits the day after tomorrow and all of the boards will have forgotten about today's product by then...
No wonder you guys look stressed at trade nights.
Me? I couldn't tell you who's in what. And I'm happy being like that. The hours are good and there's no heavy lifting.
Except once in awhile, I miss out on a card that I want, because I had no idea it existed. And then I find out it exists, and the scramble is on.... case in point. This year's A&G. I've avoided it. It's almost twice as expensive here as you can get it online... and there are other things I've been chasing, so I just ignored it.
And now this. 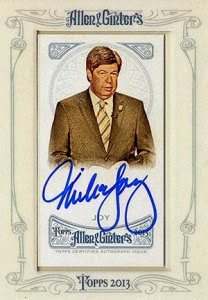 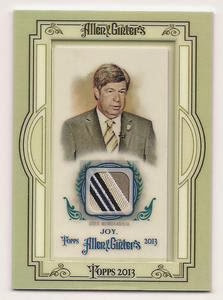 and apparently there are mini's and base cards as well. Red ink autos too.

Well I want them. If you have any of these base, mini's, relics or autos, I want them. Hit me up via email or in the comments.
And if you know of anyone who has these, send me that info too.... or let them know I'm looking.

Meanwhile I have to go scour the world wide web for some checklists of products that are coming out soon.....
Posted by Captain Canuck at 1:43 PM 4 comments:

Something old, something new....

I haven't picked up a lot of new baseball other than trying to desperately complete my Braves team sets from throughout the years. You'd think a lot of these 'common junk wax' cards would be plentiful to find, but no. Not so.
If you have Braves cards from the '90s or '00s, let me know.
But I've still managed to acquire a couple of new to me autos... they must really be valuable as they both came factory sealed in plastic prisons.
Tommy Holmes. 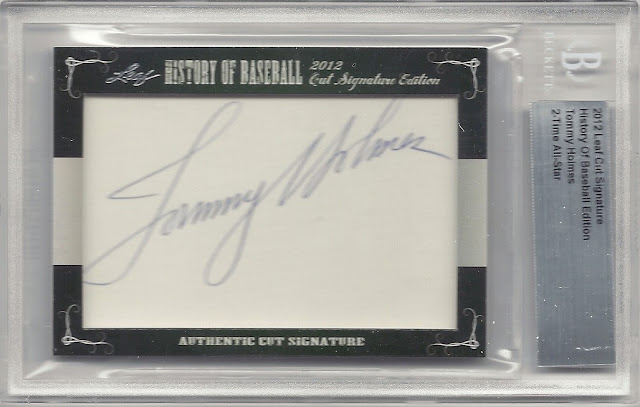 
If you like a little more modern feel to your cards.... 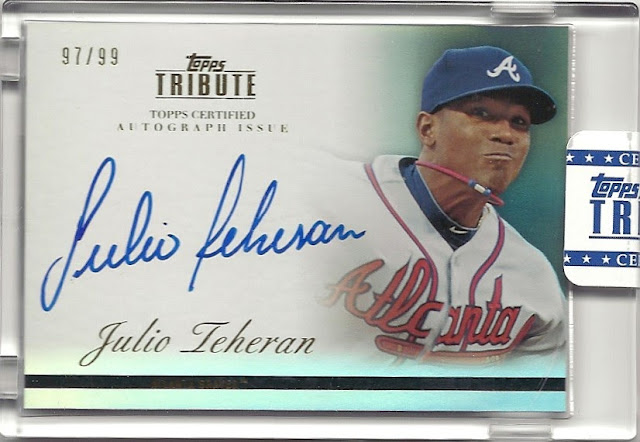 Julio is one of the top young arms in baseball... Baseball America's #1 RHP prospect.
For whatever that's worth.
But he's got a great sig.

The all knowing sure fire bet your house 2013 NFL season predictions.

If you've missed the previous exploits of Canuck and Jaime, feel free to click HERE and HERE.
Posted by Captain Canuck at 3:39 PM 1 comment:

For better or for worse this is the Barclay's Premier League.

So much has been happening so far in the Barclay's Premier League and we're only three games in.
Liverpool, using smoke, mirrors, luck, and any other advantage they can, have one three games despite only scoring three goals. All by the same dude. Daniel Sturridge.
West Brom and Sunderland have struggled early on unexpectedly. Not so unexpectedly, Manchester United is off to a slow start. Winning one, drawing one, and most recently, losing one.
On the topic of unexpected.... we go to Arsenal, where after an opening loss, fans were calling for the head of manager Arsene Wenger. Who did the unthinkable in the offseason. He didn't spend any money.
Well guess what? Arsenal has now won two in a row and Wenger loosened the purse strings for a whopping signing.
We'll get to that in a minute. First, we need to discuss a major blow to the entire BPL.
Tottenham's sale of young star Gareth Bale to Real Madrid for a record transfer fee of $132 Million.
This is a major coup for Real and for La Liga. (La Liga is the equivalent of the BPL in Spain)
Whenever a major star leaves for another league, it's big news... this is no exception. The BPL is the best football in the world. It has no equal. But that doesn't mean there aren't great teams out there. La Liga has two of these teams in Real Madrid and Barcelona.
While this is in no way comparable to Bobby Hull leaving the NHL for the WHA, it still leaves a gaping hole where once was a rising star.
If teams from the BPL continue to lose players f this quality to teams elsewhere in the world... the BPL is in danger of losing it's status as the best.*
*while others may argue that Spain's La Liga, Italy's Serie A, or Germany's Bundesliga are on par with the Premier League... it's not about talent or trophies. The BPL plays the game the right way. Watching two of the bottom tier teams in the BPL is far more entertaining than watching them in any other league. And that's my basis. Entertainment value. Style of play. Watchability if you will.
About three years ago, I was fortunate enough to pull this from a pack of Premier League stickers.
(well, okay, it was actually a redemption, but it turned into this...) 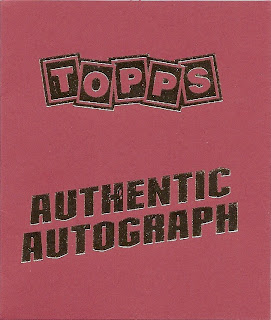 it opens up into one of those little photo holders kids give away their school pictures in.... 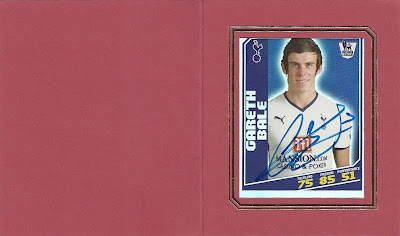 Here's a closer look at the prize. A nice little momento of the Welsh midfielder.

Where there is dark, there is light. And in this case, it comes from, of all places, Arsenal. Who after not spending any money at all, set a club transfer fee record of 67 million to get attacking midfielder Mesut Ozil from Real Madrid. Then promptly signed the 24 year old to a five year deal at $225,000 a week. 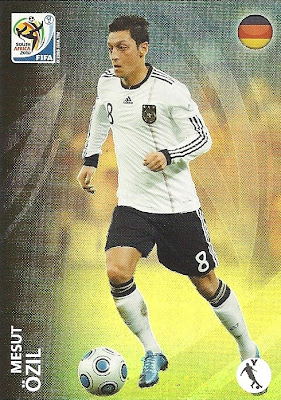 Anyone who saw Ozil play as a 20 year old in the 2010 World Cup knows he is exciting and extremely talented. I wish United had got him.
So while the BPL lost Bale, they gained Ozil, now the most expensive German player ever.

I can't wait to see him play regularly. I know he'll do well. Just hopefully not against United.

Speaking of Manchester United....  they were quiet as well. Only signing one player at the deadline. 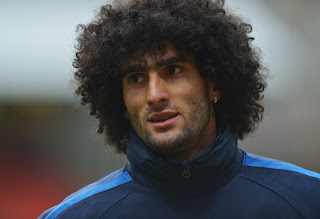 The 'fro, has come back, to United. Yes, Marouane Fellaini was transferred to United from Everton for $43 million. This will surely strengthen United's midfield position, but one can't help but notice new manager David Moyes' several failed attempts at acquiring numerous other players.
This is the big dance now David.... better sharpen your pencil and pay a bit more attention.


How did your club do? Any new faces? Lose anyone key?
Posted by Captain Canuck at 2:59 PM 2 comments: