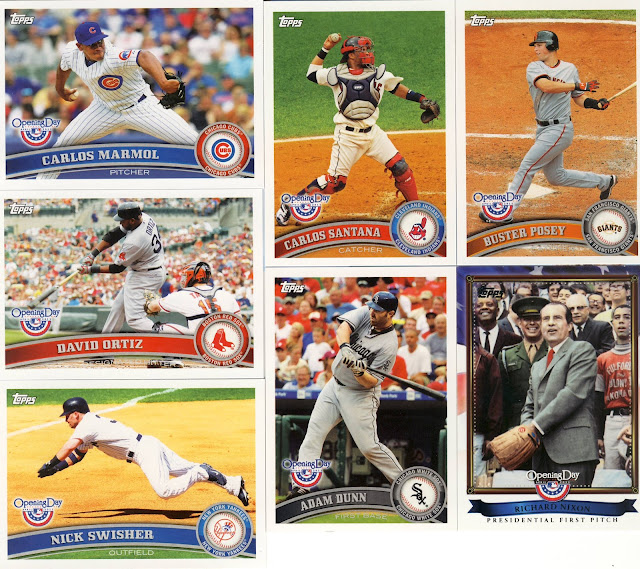 Jeff Wilk
Carlos Marmol - Remember that Robert Munsch book, Murmel Murmel Murmel? I think of that every time I hear Carlos' name. 0 pts
David Ortiz - I should take a way a point because he can't play baseball and is hanging around as a D.H. 0 pts
Nick Swisher - a Yankee! -2 pts
Carlos Santana - a catcher in full gear! +2 pts
Buster Posey - a catcher not in full gear. 0 pts
Adam Dunn - Favourite team! +2 pts
Richard Nixon - insert! Throws a strike to Ted Williams. +2 pts 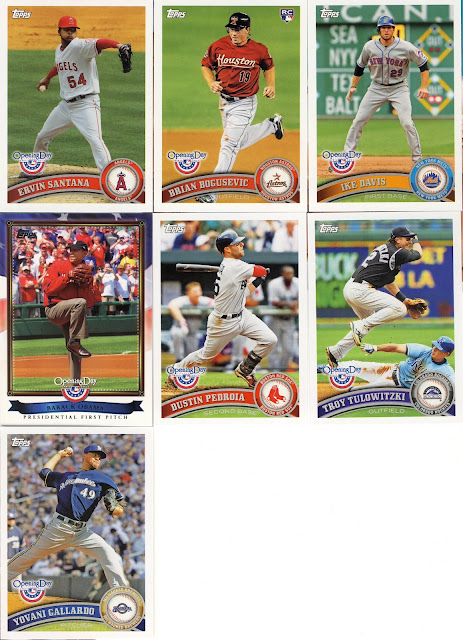 The Dimwit
he adds cheese to a cheese pizza +1 pt
Ervin Santana - will he ever live up to the hype? 0 pts
Brian Bogusevic - Favourite team! +2 pts
Ike Davis - a Met. -1 pt
Obama - insert +2 pts. So far, on the two Bush cards and on the Nixon, the back of the card mentions that they threw the ball right down the middle as a strike. On Obama's card, it mentions that the ball sailed high and to the far left. Is that irony or a metaphor?
Dustin Pedroia - how can someone win the MVP and then disappear? 0 pts.
Troy Tulowitzki - cool action shot. 0 pts
Yovani Gallardo - boy did he get lit up last night. 0 pts. 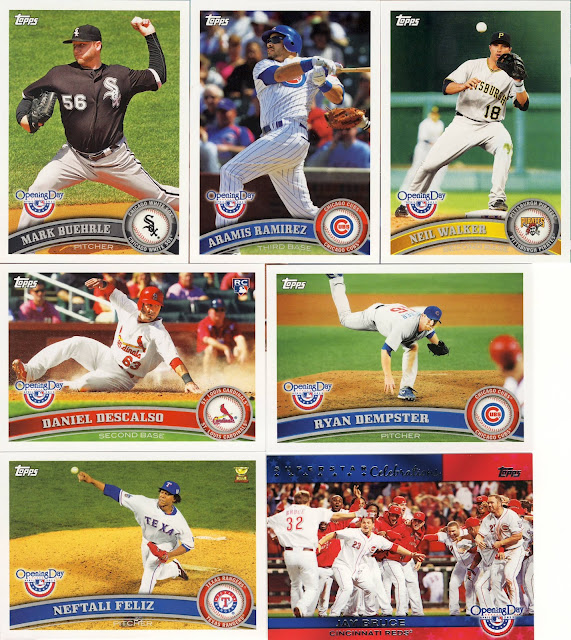 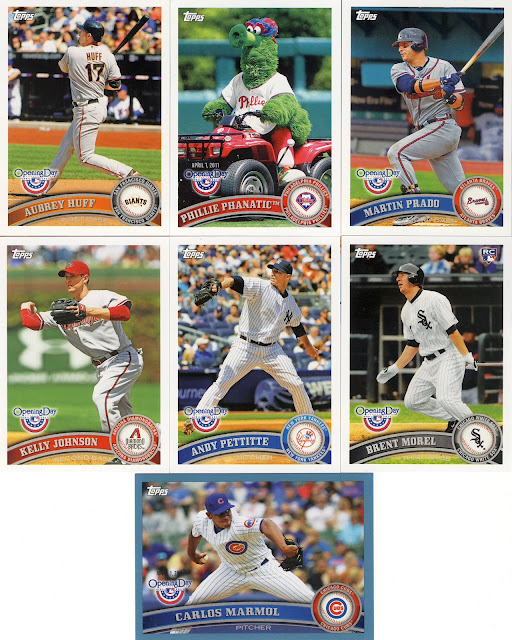 And that Tulo card is superb.

Catchers, Presidents and Mascots, oh my!

Up to 3 Giants in the break so far but none for me. Will the 8 points stand up???

Knowing my luck, I'll end up with a pack full of people with dreadlocks

The Angels In Order said...

I prefer the Walmart blue over the Target red.

I gotta ask - what in the hell did I get a bonus point for? My stunning looks?

The Cubs will trade Marmol to any team for a few cases of Frosty Malts. Add in the wooden spoons and we'll throw in Kerry Wood.

according to the very professional and strictly followed rules posting, you got a bonus point for commenting.
And two more for this comment on your own pack break post.
So now you have 3.

Damn, I was a hopin for the Braves Mascot!! Figures I'd hit a Phillie insert! Hey, wait a minute, do you combine points, He is an insert from my favorite team, that should be worth 4 points -1 for being a Phillie for 3 points total?? Too bad I don't get bonus points for my categories, cause even though Aubrey is sitting in the corner eating paste, he does wear the #17 jersey!! No points for my Canadien Bacon Pizza!! And I happen to agree, Petitte is a DAMN Yankmee!!
And I'm still happy cause I beat my score from PATP's pack war!!

I hope Santana comes up again in my pack !

Obama may pitch to the left, but that's one hell of a wind-up.

And please don't deduct points from me, but I love the Phanatic. Hate the Phillies, love their mascot. He's stinking hilarious.

Valentine has said that Ortiz will get some time in on the field this year. Pedroia had foot surgery the year after his MVP and just got all the extra screws taken out this offseason.

I am going to say Nixon should have been -1 because his opening pitch probably missed the mitt!