J Hey was traded to me during Thursday trade night at the local shop. He was part of a large 5 cards for 10 cards deal. I ended up with two baseball and eight hockey cards in the swap.
The main piece going back the other way was a 2011 Bowman Platinum Edwin Encarnacion bat relic auto /100 that I was going to show you.......... but I can't find the post in which I originally posted it.
So imagine it in all of it's green and blue shiny goodness.
Now look at Jason. 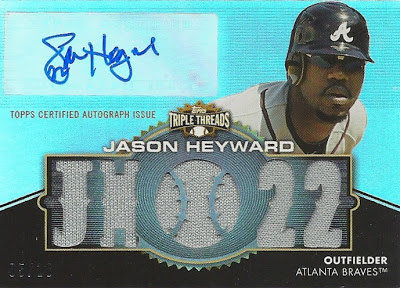 in case you can't read the wonderful foil, it's numbered 05/18

Jason and his newly acquired Gold Glove can rest for awhile now. They're home. Speaking of Gold Gloves... I can't believe out of the four nominated Braves, only Heyward won. Prado didn't get it, Freddie Freeman lost out to former Brave and Waxaholic fave Adam LaRoche, and the best defensive outfielder in baseball, Michael Bourn, lost out. And that's not me calling him the best, that's a quote from MLB.com.
Apparently being the best doesn't get you very far these days.

But I digress.... I also picked up the #1 best looking card from all of the 2012 baseball cards produced. This one would win any contest or poll.

Look at those beautiful and shiny black borders. 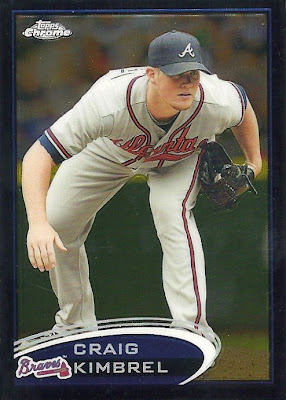 Undoubtedly the best card of 2012.

until I manage to find the Orange one.

or the Blue one.

and the Purple one...

Posted by Captain Canuck at 5:00 PM