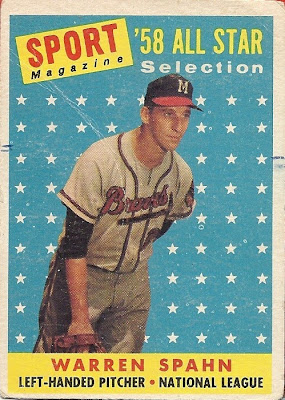 And it fits nicely on the same page as my '58 Eddie Matthews All Star. Now to fill the space between them with some guy named Hank.
Posted by Captain Canuck at 10:40 AM

I remember when he was having that contest. I think the only reason he put that Spahn on the giveaway block was it wasn't "poor" enough. LOL.

I'm on the same field as you with not minding if a vintage card is "crisp and clean, no caffeine". A while back I blogged about one of my beloved cards I've had since forever which is a "Poor Old FOOTBALL card" that I eventually found a replacement for, but I still hang onto the beat up beloved one. http://captkirk42.blogspot.com/2012/02/upgrade-update-or-two-ralphs-make-that.html

Terrific card. Nothing about that card would make me not want to own it.

But your "greatest left-hander ever" comment is giving me that pain over my right eye.