Topps puts the screws to me again...

Ah.. the beauty that is exclusivity. And no, the lousy Donruss offering from Panini doesn't count.
There's only one game in town, and it's Topps.

For better and for worse, we're stuck with them. To that end, when my wife decided to buy me some baseball cards on her last Wally World visit, she brought home one of those hanger box thingies of 2014 Topps baseball.

I don't recall ever opening one of these... maybe I have, but if so the experience eludes me. On the box it warns me that packs containing a relic card may only have between 2 and 12 cards. Not the standard amount. Okay, I can understand that. The box tells me that it contains 72 cards. Cool. Six packs to rip.

Inside is one clear cellophane package with a brick of 72 cards in it. No packs. None.

So what in the hell is with the warning then??????

Thanks to the no fun and no suspense clear packaging, I see that yes indeed I do have a relic card. (SPOILERS!)
Either that or they've stuffed a decoy card in there. Can you imagine?! A decoy in a package like this? Oy.

Anways, I won't bore you any more... we've all seen enough Topps to last us well past the next ice age.
So just a couple of highlights... and a really big lowlight.

My only Brave in the box, JHey. I appreciate the great catch, but there's something about a baseball card where you can't see their face... I dunno. 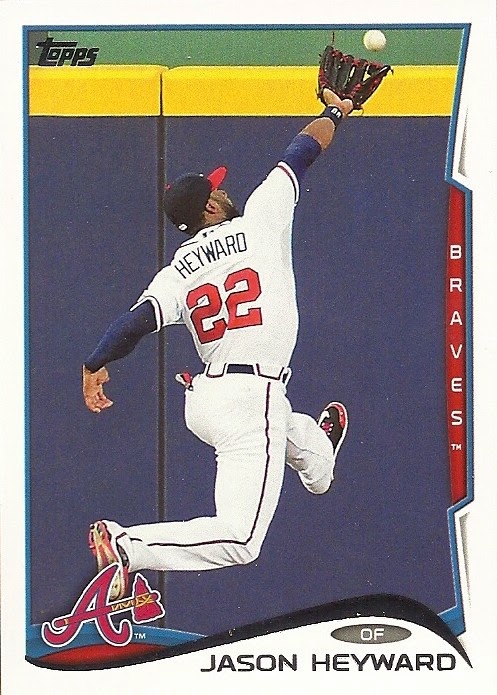 I have no idea who the hell this dude is, but I can tell you that there are not nearly enough second basemen in the big leagues with the name 'Scooter". And I am unanimous in this. 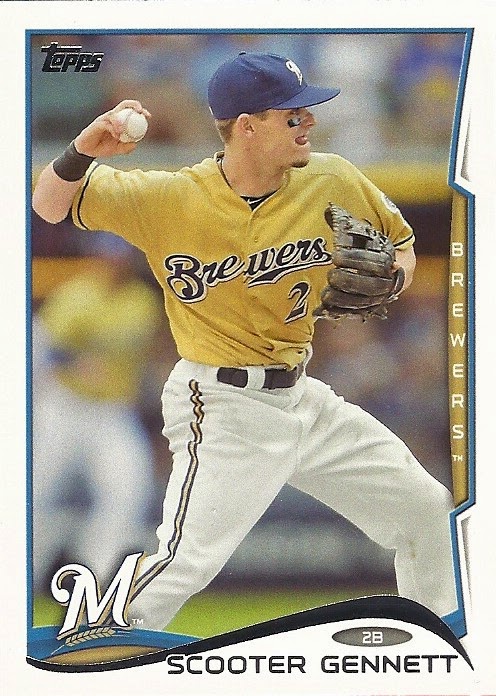 I got two of those retail yellow border cards, Harper being one. Is he still the one? Or did he do a Strasburg? Have we moved on to someone else? Maybe that Pig guy in L.A.? (I call him El Puerco by the way) 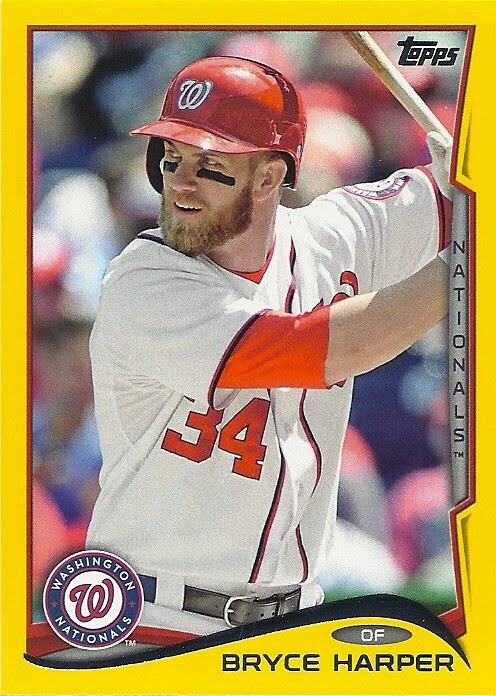 Finally the big hit. You only get a relic in every 'X' number of boxes apparently, and I nailed one. AND he's a great young pitcher, AND he happens to be one of the last ones standing on my favourite team!!! Go Braves!!! 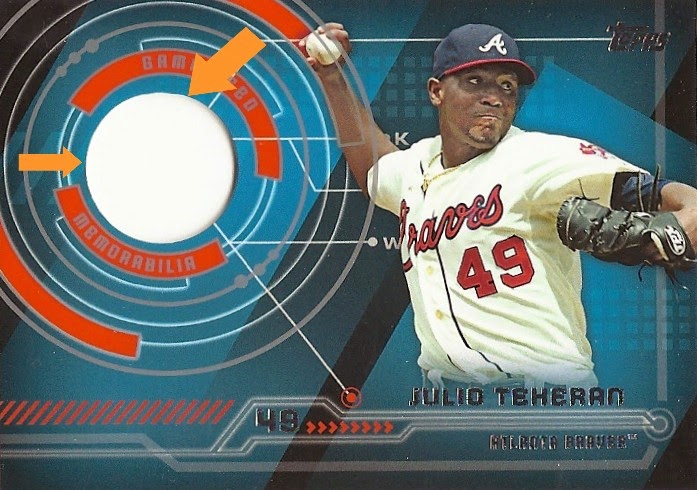 Thanks again Topps.
Posted by Captain Canuck at 1:07 PM

I love Scooter. He's probably one of my favorite Brewer youngsters. I got to meet him at spring training a few years ago and he signed a ball for me. He got a lot of playing time last year at the end of the season due to injuries and ahem suspensions. I'm looking forward to seeing what the kid can do if he gets the full time 2nd base job.

Or is that a 'card accident'.

See what I did there?

Ouch! That sucks to pull that Julio, only to have it missing the swatch. And a Brave, nonetheless.

Funny.....Topps said they took over the process of doing these cards so there would be less issues.

So what then are the orange arrows pointing at?! Their mistake?!