That's the question. I'm not talking about the Strasburgs and Harpers of the world. Fox, ESPN and Topps force us to know about those guys.
I'm talking the A ball, AA ball, and AAA guys from your favourite team. Do you know who that hard hitting SS is down in High A?
I'm asking because when I was at the card shop last night, the owner handed me a gift from under his counter.
A nice, shiny card of Braves prospect Kyle Kubitza. 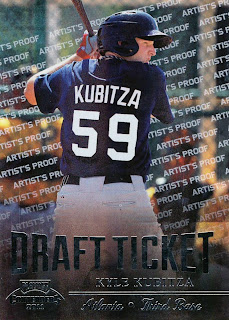 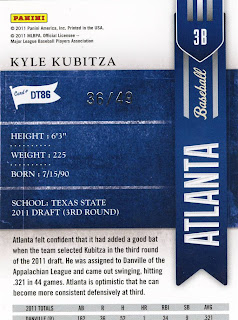 A buddy of mine immediately asked me if Kyle was any good. I had to admit I had no idea. He played rookie ball for our low A club in Danville last season after being drafted in the 3rd round of the 2011 draft.

Should I know this? Do you other Braves fans know of him?
Do you follow your team that closely?
Posted by Captain Canuck at 4:58 PM

I pay attention to the Triple-A guys, because a lot of them will show up in the major leagues at some point during the season.

I pay attention to the Double-A guys, because I live close enough to an Eastern League city to go to a handful of games during the year.

I don't worry about the Single-A & Rookie level guys, though.

Honestly, I barely pay attention to the minor leaguers in the Twins system only because I end up with a lot of their Bowman Chrome AUs. That's about the limit of my farm system knowledge.

I don't know all the names or even who all the best players are, but I do have short cuts to all of the Tribe minor league teams sites on my desk top. I try to check them out every now and then.

Do you remember Harold from Bluegrass Smoke Signals ? He was a big minor league fan. He just sent me over 30 Cleveland minor league team sets.Watch for a post soon.

I'll keep an eye for guys having a good season and/or are annointed top prospects within the particular team [the Angels for me], but not on a day-to-day, 24/7 basis.

I follow Oriole farmhand Jake Cowan closely. Why? Because his dad is a good friend that I've known for almost 40 years. Jake hopes to move up to Fredrick this year after spending last season in Aberdeen as he recovered from shoulder problem.