Time for Week Two!
If you're new to the contest, you can sign up below. After the pictures. There WILL be words after the pictures.
For those of you who already have signed up, leave your responses in the comments at the end.
I'm disappointed with this first one. I was under the impression that the Premier League and World Cup kits would be authentically represented in painstaking detail.
No one wears pink in the Premier League.
Kathie Smith must be wearing some sort of training kit. 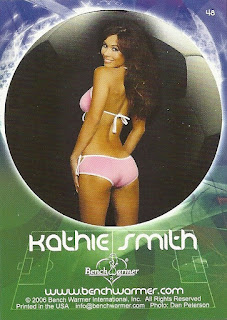 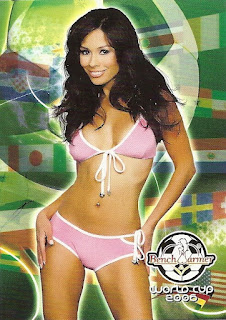 Not only is Allegra Wynne good for your allergies, but your rules interpretation as well.
A Gold Star for those of you who gave young Allegra a Yellow Card for wearing jewellry while on the pitch. (A ring, on her finger. Her finger. By the ball! Never mind...) 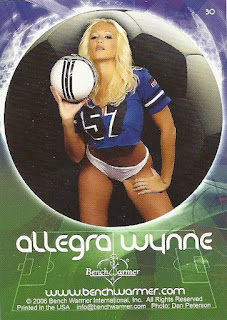 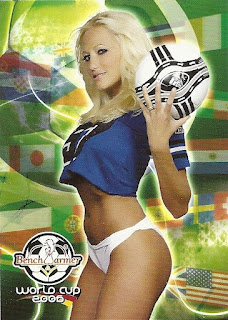 Tamara Witmer has been sent off and will not be allowed back on the pitch until she strips off that torn jersey and replaces it with a fresh one. 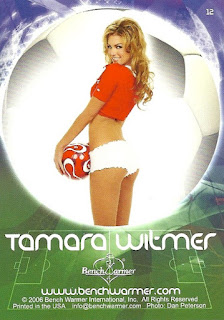 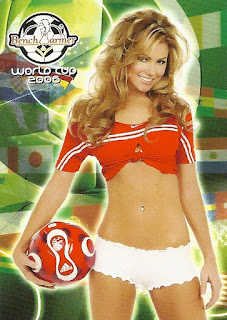 Nothing wrong with Nicole Bennett here... but unfortunately the trainer seems to have shrunken her top. Might be a titch uncomfortable to play in that! Especially during throw-ins. 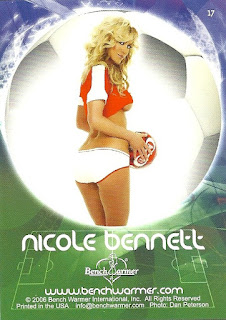 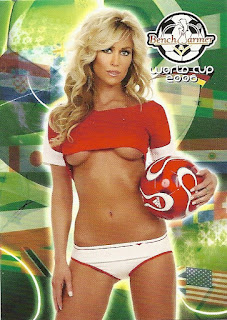 Speaking of throw-ins, Jacqueline Finnan shows us the correct form for a proper throw-in. Well done! 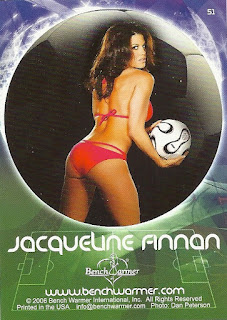 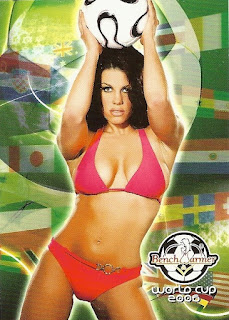 Alright. Now onto the contest. To refresh everyone's memory, or to inform those newcomers who wish to participate, I will post a pack of these cards every Saturday during the season. In the comments section, post the SCORE of your favourite team's game, and at least ONE GOAL SCORER from the game, either team. If the game ends 0-0, then instead of one goal scorer, list BOTH STARTING KEEPERS.
Also, if you're new, let me know who your favourite team is. If you don't have one..... go HERE <------Clicky and choose one.
All of the teams have their icon at the top that will take you to their home page. Do a little reading and have fun choosing!

If you post by the deadline of Monday, 3pm MST, and get all three things correct, you will get 3pts. If you mess up on something, I'll probably give you 1pt. Not posting gets you nuthin'.
This is a season long contest, so there's lot's of time to get in and win.

The standings after one week.... as can be expected, are deadlocked. EDIT ALERT!!!: it must be the heat or something.... they are not deadlocked, as bob and Reds did not post the required info by the monday deadline. My bad....


any questions? leave a comment and an email and I'll answer... otherwise get watching and commenting!
Posted by Captain Canuck at 6:30 AM

Verrrry disappointed to post a 0-1 loss by Man U to Everton on Monday. Fallaini got the score.

Have to rebound vs Fulham

Man U. came from behind to win 3-2 vs Fulham. Not sure how the benching of Rooney will affect the team, but for today it worked since Van Persie scored.

B
Do you think I could take Fulham. I have high hopes for them this year!

Reds blow it at home. Skrtel, and Suarez for Liverpool: Toure and Tevez for Man. City.

It will NOT Be either Manchester this year -

New Castle was beat by Chelsea, 0-2. A goal was scored by Eden Hazard.

no more entries for this week.

check back on saturday for another chance to enter.

Fulham 2 Manchester United 3 Damien Duff (Fulham) left footed shot from the centre of the box to the bottom left corner. That or a manchester own goal.

Tie with Manchester City all 2s.

Almost forgot...My Rangers played Norwich City to a 1-1 tie. Simeon Jackson put NC on the board 1st at the 11 minute mark and Bobby Zamora tied if for the Rangers when he scored on a rebound off a penalty kick at 17:36.