We still don't have a season. Judging by the behavior and greed of MLB and the MLBPA, we may not get one.
But, we still have baseball cards. 2020 Bowman came out recently here. There was a wee delay in getting it across the border. But it's here.
Or at least it is in some shops. The complete insanity over it has caused many shops to sell their allocations to dealers in the U.S. at absurd prices.
My local shop kept theirs. I did not buy a box. $750 for a jumbo box and $385 for a hobby box is out of my league. Those prices did not stop anyone else as they sold out of their cases of jumbos within a couple of hours....

I did manage to scrounge up a few Braves from the scrap pile as wrappers and boxes flew everywhere.

Here is my first, and quite possibly last, taste of 2020 Bowman.

Acuna Jr. is from the veterans part of the set. 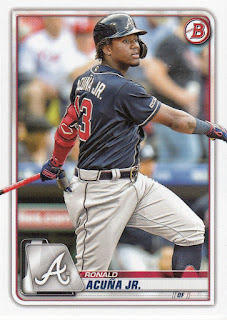 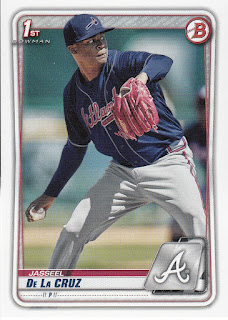 My man Drew made it to 'AAA' Gwinnett last year, getting into 26 games. Smacking 2 homers with 11 RBI's and hitting .271
He also managed to hit .167 in 15 games during Spring Training before the world ended. 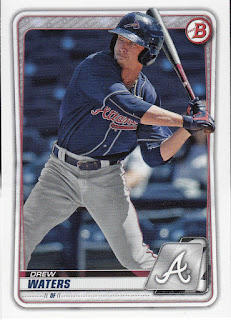 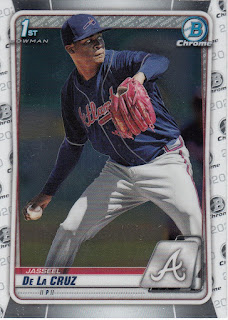 Here we have another chrome in Bowman that isn't Bowman Chrome. This one featuring Shea Langeliers. This Baylor grad made his debut in 'A' ball last season for Rome.
During Spring Training, he got into 8 games, batting .429 with a homer and 5 RBI's. 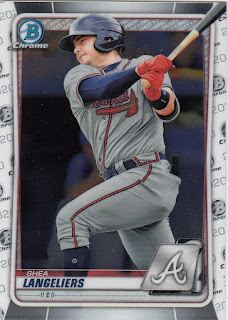 So there it is. I'm not seeing the fuss. But I like pulling cards out of packs of players that I know and can see on TV. The youngin's aren't really my thing until they've made it.

Did any of you jump on Bowman?

Posted by Captain Canuck at 6:00 AM

$385 for a hobby box is out of my league too. The only way I see myself owning any of this stuff is if my buddy opened any and decides to sell me his leftovers. But I'm gonna guess that he wasn't willing to dish out this kind of money either.

People paying money like that for cards that look like that is and will always be baffling.

Per usual, I will rely on the kindness of others for my Bowman Dodgers. But if I don't get them, c'est la vie. I find this set the easiest to ignore.

I'm guessing that the greedy MLB decision makers will announce they are starting the season with a bogus all-star game (idiotically thinking they're doing us a favor, and getting fans "involved" with phantom voting). JUST START THE REGULAR SEASON WHEN IT'S SAFE TO DO SO, and forget the contrived PR nonsense. (What all-stars anyway? There hasn't been a first half of the season yet.)