Back in the day, before the Player's Associations, Lawyers, Agents, and all of the other slimy people who don't collect sports cards decided they should be in charge of sports cards, Upper Deck made baseball cards.
They started out amazing. But from that peak, they went into a decline until the license was pulled out from under them like a cheap area rug.
The late nineties was a shrine to gold and bronze foil. Upper Deck must have bought in bulk. They used it excessively.

In my recent return to paying attention to want lists long ignored, I purchased around forty of these. Here are a few faves.

Probably my favourite all time pitcher.
John Smoltz. I really like the pose on this one. Not a common photo choice. Not too sure about shrinking it out of ratio in black and white right beside the colour version though. 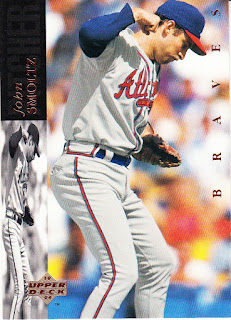 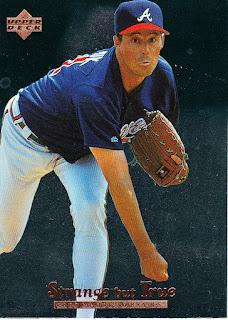 Andruw Freaking Jones. The best center fielder of my generation. The man won 73 consecutive Gold Gloves. 73!!! Go ahead. Look it up. I'll wait. 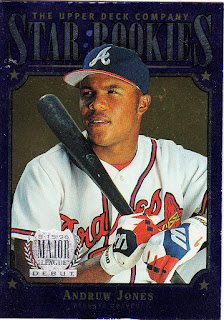 Crime Dog! For some reason out of the over forty UD cards I bought, only three were duplicates that I already had. All three were of Fred McGriff from different years.
Odd. 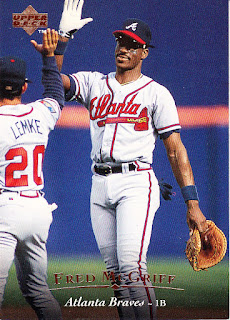 Javy Lopez! Again, more hideous brassy gold foil. Yuck. Love the action shot of him pulling off that mask and fielding that bunt? Getting ready for the throw home? 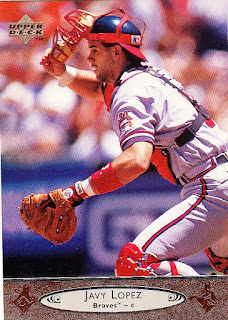 One of my favourite Bravos of all time. The Lemmer. This time with brassy gold foil woodgrain! Way to mix it up Upper Deck! 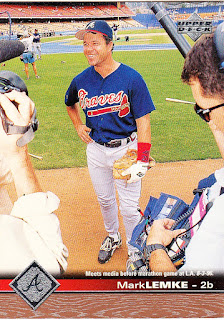 Do you miss Upper Deck baseball cards? What was your favourite set from them?

Posted by Captain Canuck at 3:00 PM

Can't say I miss Upper Deck. I'm one of the few around here.

Andruw Jones did have 73 Gold Gloves until that he posted the worst season of all-time in 2008 and they subtracted 62 of them as punishment.

I sense bitterness from Dodgerland…..

Heck yeah, I miss Upper Deck baseball. I really enjoyed their early 90's baseball releases... as well as their SPx cards from the mid 90's. But if I had to pick only one set from them, I'd go with 2008 UD Masterpieces.