He shoots! He Scores!

A quickie post this evening. I wasn't able to find too many needs for my Score Braves team sets.
But I did come away with two.
Both from the 1990 Score Update set.

Franky Cabrera.
You've heard me freak about When Sid Slid a lot on this blog.... Well Franky here is the one who was called on to pinch hit and drove the grounder to right that allowed Sid to slide.
That makes him an All Time Brave.
Come at me. 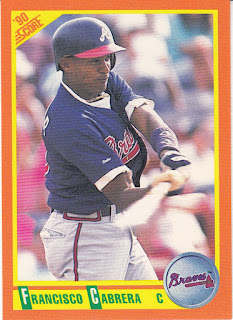 Ernie Whitt??? A Brave? Blink and you'll miss it. Ernie played 15 seasons in baseball. 14 in the American League, and 1 with ATL. He didn't do so well in the N.L. One last hurrah for Baltimore in '91 and he hung up his mask for good. 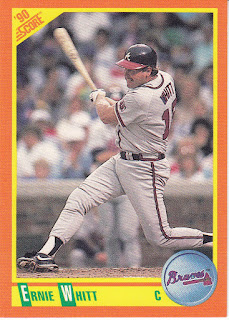 Now we'll see who's been paying attention.
This post featured 1990 Score Update. My last post was about 1990 Fleer Update. Both sets had two Braves catchers in them. But they were different catchers. How many did the Braves use that year??

It was Jody's last season in baseball. Kelly played 18 games as a rookie, and then never played again. Tyler didn't make The Show until '96. Played a handful of games for the Braves and was shipped to the Cubs.

As much as I love Fleer and Donruss.... I think Score may be my favourite. The '91 set is one of my faves of all time. (In spite of all the black and white photos of shirtless dudes.)

Any of you have favourite Score cards?


Oh, by the way, Nacho is having a Ginter contest. It's rather complicated, but hey, what else have you got to do? Go and enter. Tell him I sent you. You'll get a discount.  Nacho Grande

Posted by Captain Canuck at 8:20 PM

Only two 1990 Score Traded even pop into my head: Frank Thomas and Eric Lindros. I collect Frank, but seeing Lindros make it into a baseball card set was pretty cool, so I'd call that card my favorite.

I've got a nice Gary Carter from that Traded set. The orange borders are...really something.

I am forever thankful to score for making a 1988 steve garvey card.