It's playoff time! And that means one thing... a CONTEST! 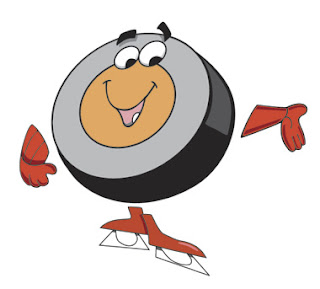 It's the absolute best time of the year, playoff hockey time. Hockey has the most exciting playoffs of any sport. My adrenaline may not calm down until June. And to celebrate, and because of the immense success of last years contest, Waxaholic is going to hold it's 2nd Annual Hockey Playoff Contest! And just like last year, you don't have to know anything about, or follow, hockey. Just be a lucky guesser. If I remember right, the winner last year did not watch hockey and gave the prize away to a friend. So if you think you can't enter, you're wrong.
All I ask is that you either click the "follow" button over on the right hand side, or send me an email, or both.... just so I have a way to contact you. Either one, your choice. Even you readers that don't have your own blog and don't say anything in the comments... you can enter too.

This year will be divided into two parts. You must enter both parts to be eligible for the prize. The first part is now, and you have until Wednesday evening to enter.
Enter by leaving a comment on this post. What do you have to say in the comment? I'm glad you asked.

Simply pick the winning teams from the first round matchups of the 2010 NHL playoffs, and predict (that means guess) how many games the series will go. All NHL playoff series are the best of seven games.


So there you have it, pick one team from each matchup, pick a number between 4 and 7 for each, and Bob's your uncle.

Good Luck, part two will be up near the end of the first round (10 days or so) and I'll have my review and predictions up on Thursday.
Posted by Captain Canuck at 11:43 PM

Caps defeat (your) Habs in 6 games.
Devils defeat Killadelphia in 5.
Sabres top Bruins in 4 (BOLD?! Or do I just hate Boston?)
Penguins defeat Sens in 5.

Chilly Clarence Conference
"When the hell did the Sharks get good?" over "Is Patrick Roy still playing?" in 6
"The stinkin BLACKHAWKS are in the playoffs?? No Effing way!" over "What the hell is a hockey team doing in Nashville? Move 'em to Winnipeg." in 5
"Why are there two useless teams in California with the same name?" over "Nice Olympics buddy, stick to curling." in 7
"Gordie Howe can still play in the League!" over "Arizona hasn't seen Ice since the glaciers receded three million years ago. Move 'em to Moose Jaw." in 6

The Coyotes and Kings are in the playoffs this year?? I have to start watching Western Conference games.

Let's see if I do better this year:

Hmmm...I'm not much of a Hockey follower, but let's take a crack at this anyway (I love free cards!):

San Jose Sharks finally win a series, in 4 too, a sweep!
Chicago Blackhawks in 4 also a sweep!
Los Angeles Kings in 5
Detroit Red Wings in 5

Lets see if I can do better this year.

Thanks for the contest :)

I'm in I'm in maybe this will make we watch all the playoffs.
POWC
#1 Candians over Capitals in 5
#2 Devils over Flyers in 5
#3 Bruins over Sabers in 6
#4 Penguins over Senators in 4