I've been bored lately. All of us have. No new stuff. Too much bad news. Not enough fun in the hobby lately.
When I'm bored, I hit up ebay. You can shop for hours and find anything you can think of. Well, I found some tobacco cards.
No. Not any T206 Magee or Wagners.... but better. Think Benchwarmer, but 70 years ago. 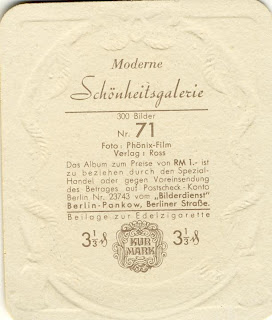 Anyone sprechen sie deutsch? The little hottie up top is Gretl Theimer. An actress born in Austria-Hungary. And you know how I feel about Hungarian women...
Next up is Käthe von Nagy. Another Hungarian Hottie. 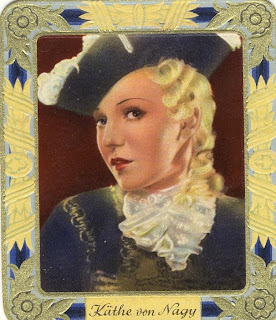 another card of Gretl. Who can blame me? 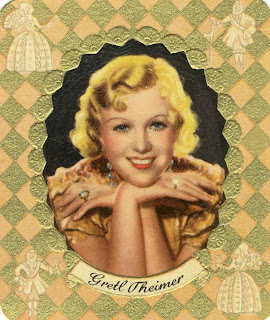 I'd track her down, but she passed away in 1972. I never did have the best timing in the world.
I was going to do a nice write up on this set, but in researching it, I came across another blog that did it much better than I would do. So why not just let you go there and read up on this set? (for those of you that care to , that is.) Here is the LINK. *
Oh, and these lovely cards came to me along with a few others I bought off of the same seller.
.99 cents each. For cigarette cards from 1934. Of really hot women. Jackpot!
*the article was written by Mike DeNero & Kyleigh Spencer and was published in three different magazines:Classic Images (March 2009)Card Collecting News (October & November 2009)Collector Magazine (Spring 2010).
Posted by Captain Canuck at 11:39 PM

Very cool. Are there any center-tri-folds?

I would appreciate Topps' attempt at those cards much more if the included actual center-fold girls instead of 24 random pieces of cloth and wood.

That's an impressive set--just pointed back to this post from a site profile on the #5 blog. (Unfortunately, I don't speak German for helping with the translation.)

Keep up the good work!