The best overall player in the league! 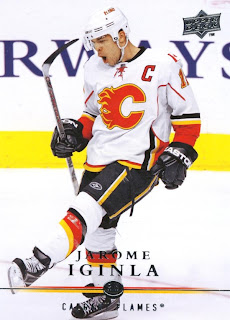 Iggy's first goal was also the 400th of his career. At only 31 years of age, the best two way player in hockey will no doubt get 600 before he's done. 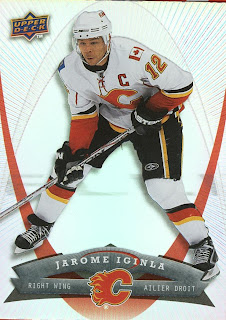 A lock Hall of Famer.... Jarome has a sense of humour as well. I was at the game on Friday to watch him break the record.
Nothing.
Tonight when I'm at home watching on TV?
5 points.
Nice.
Thanks Jarome. The only reason I'm in a forgiving mood is that you were my 1st round pick in this year's hockey pool.
Posted by Captain Canuck at 8:59 PM

I'm ecstatic about Iggy's points! Of course I had to work tonight so...

Hey Brian did you want a full set of the NHCD cards? I have one for you if you want!

Nice to have a legend on the team - not since Joe Cullen and Lanny McDonald ...

No disrespect to you or your countrymen - In my opinion, we should have struck up a trade between our two countries years ago. You send down the Blue Jays and the Expos, and we'll send you back the Avalanche and Coyotes - and you can rename them as you see fit. I think MLB belongs in the U.S. (i'm NOT a fan of the WBC, by the way, or overseas season openers) and the NHL belongs strictly to Canada and the few Northern states' teams where snow and most importantly ICE naturally occurs during the winter.